Somehow it's impossible to deliver books without doing some birding which was the case on Tue. After a delivery to Bowser, I decided to drive up a side road towards the Botanical Gardens. I spotted a Warbling Vireo in a maple but, once again, was unable to get the picture. I spotted another bird in a nearby huckleberry bush. 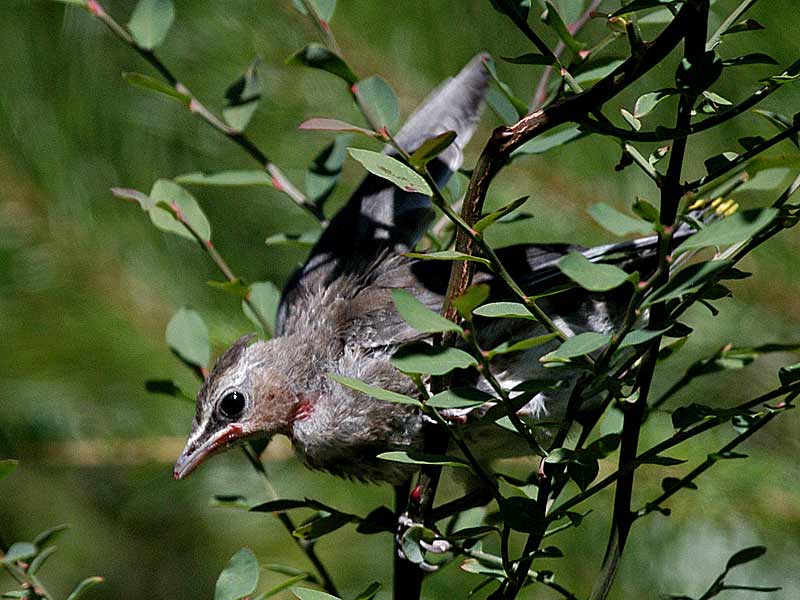 I wasn't sure what the bird was at first. 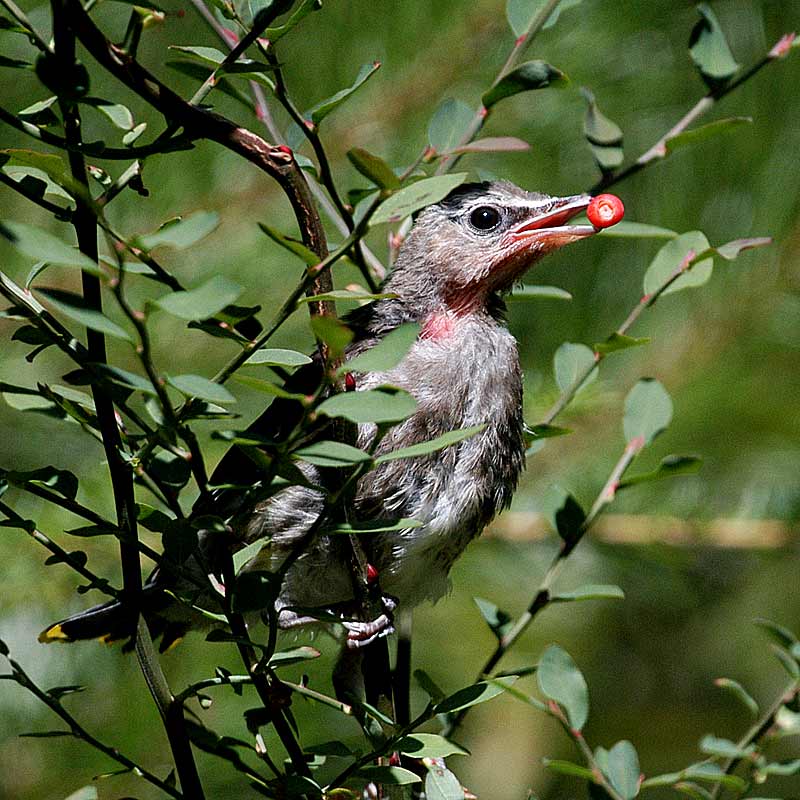 The huckleberry-in-the-bill was a dead give-away. It reminded me of one of my favorite pictures only with Hawthorne berries. The second clue was more obvious. The yellow tip on the tail was distinctive for a Cedar Waxwing. 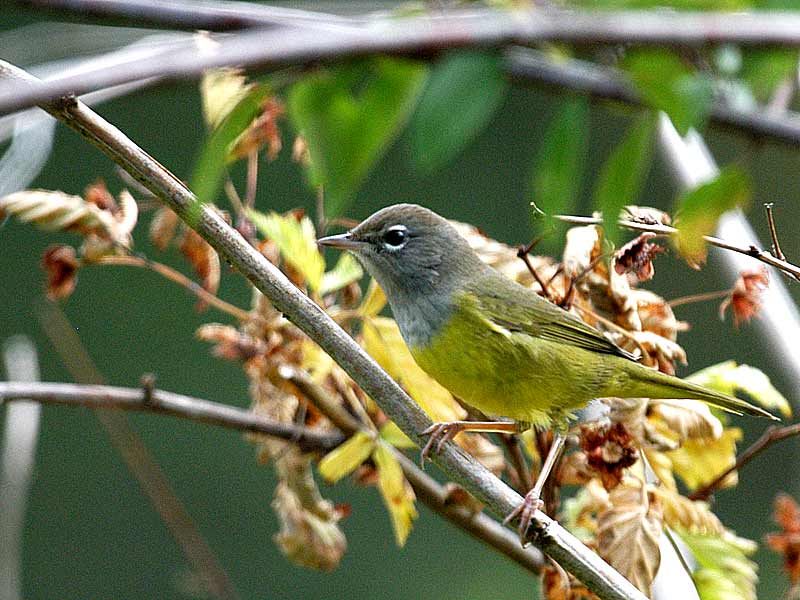 Later, after delivering some books to SEARS in Parksville, I stopped at Kaye Road. The usual Willow and Olive-sided Flycatchers, White-crowned and Song Sparrows were home as was the MacGillivray Warbler.

You won't believe this, but it's difficult to go into Parksville to pay the bills without doing some birding. In fact, it's even difficult to go down to Trudelle's blueberry farm in Cedar with out stopping at Holden Creek. 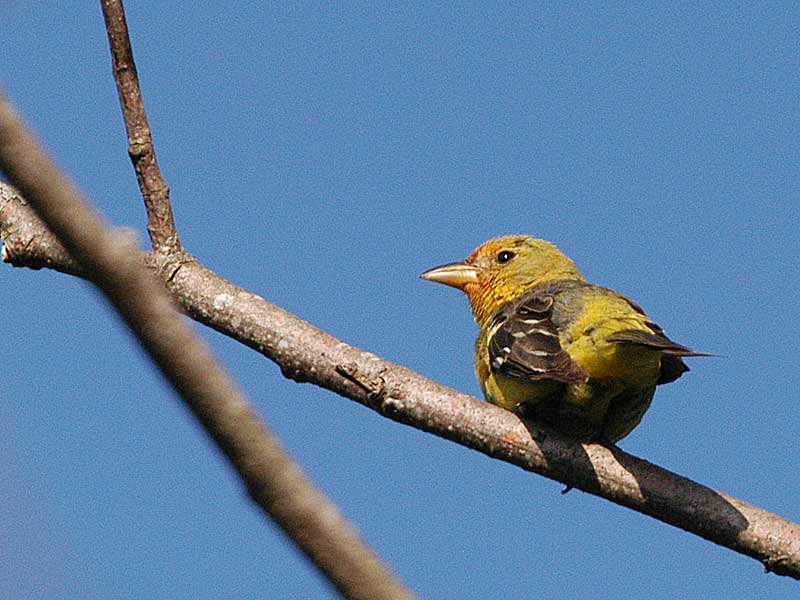 On the way to town I detoured through the Rocking Horse. I stopped to watch a Downy Woodpecker and noticed 2 birds on the next tree. They were juvenile Western Tanagers. 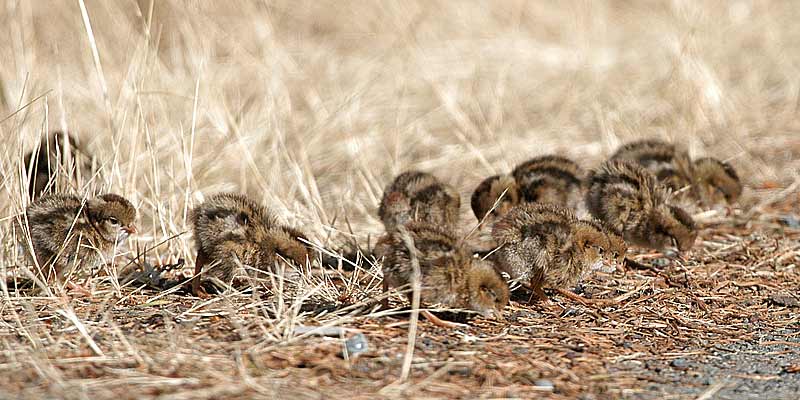 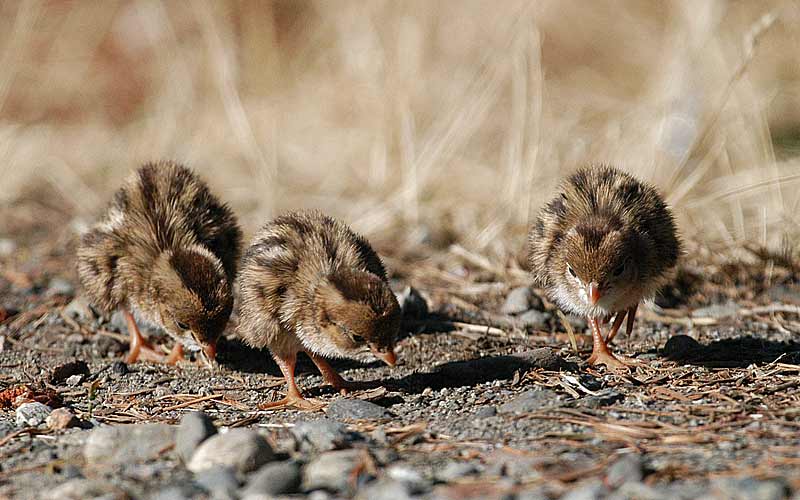 I had to wait about 20 minutes before Momma brought the little flock out to the road, but it was worth it. They were the cutest little fuzz-balls. 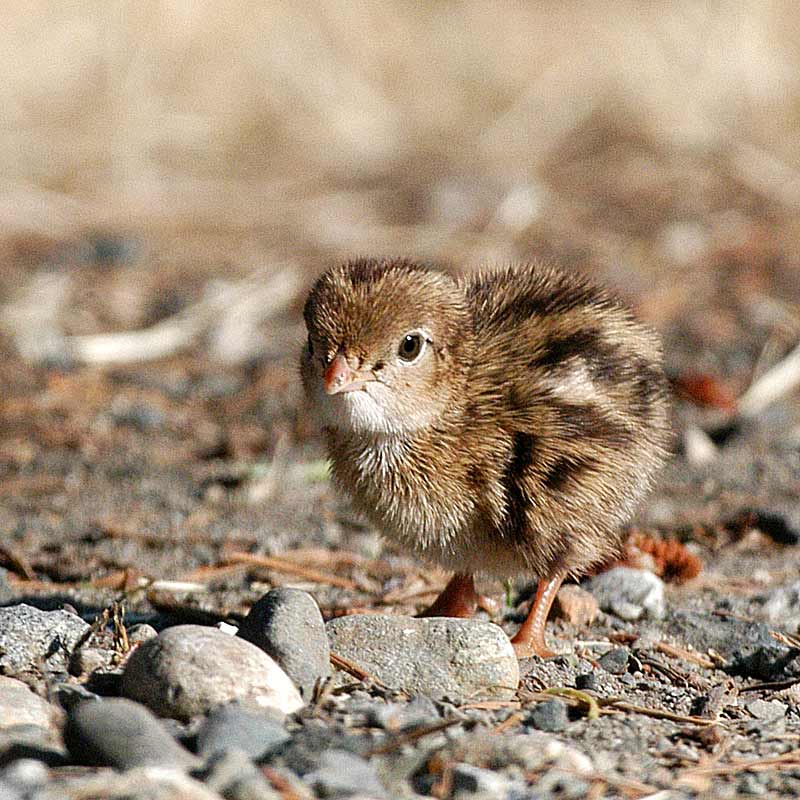 The chicks were just getting into my optimum camera range when another car came by and frightened them all back into the bush. 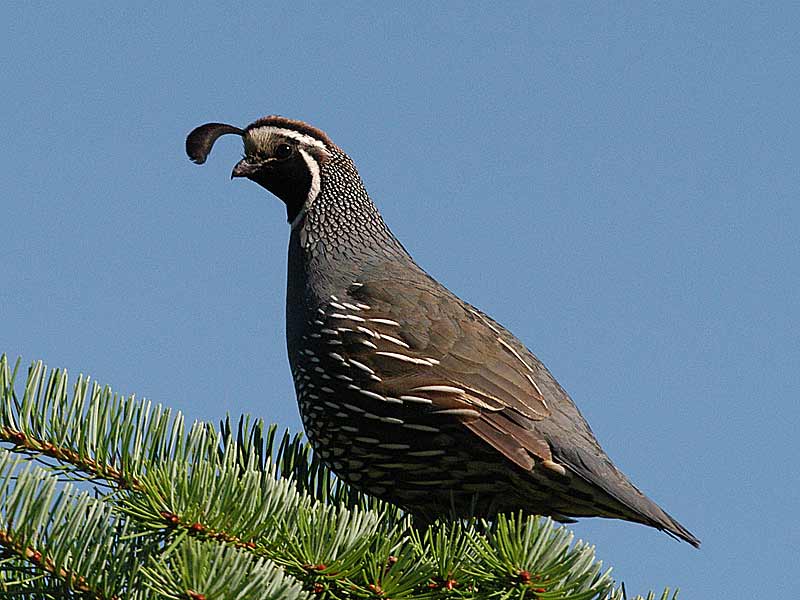 Everyone disappeared except the sentry. He could see that everyone was safe.

After lunch we decided to pick blueberries at Trudelle's in Cedar. I know you're not surprised that I checked into Holden creek despite stopping there the day before on my way back from Crofton. There were only about 30 peeps there the day before, but what a difference a day makes. Today there were 2 million mosquitoes, 200 peeps, 1 Semipalmated Plover, 1 Long-billed Dowitcher, and 1 Short-billed Dowitcher (confirmed by sound), and 1 Pectoral Sandpiper as shown above. 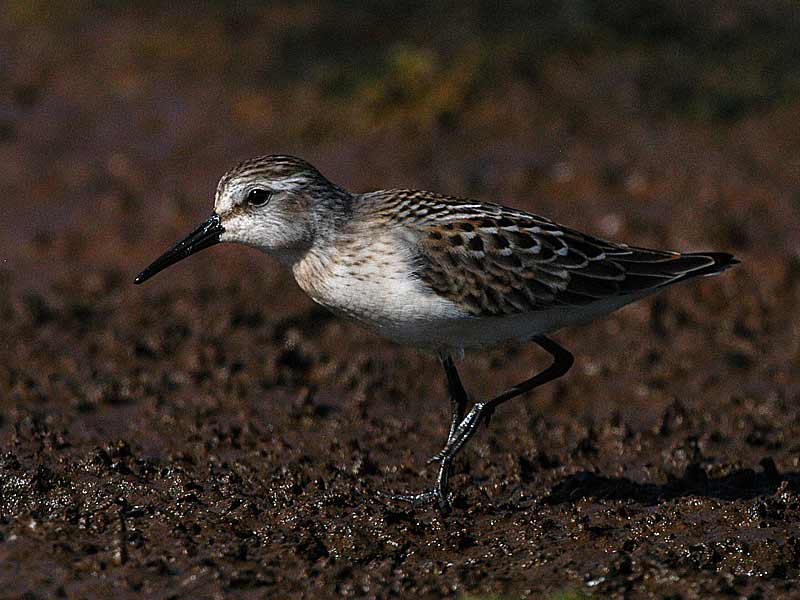 Most of the peeps were juvenile Least Sandpipers, but there were also a few Westerns (above photo) for the first time this year. There was only the occasional Semipalmated Sandpiper. 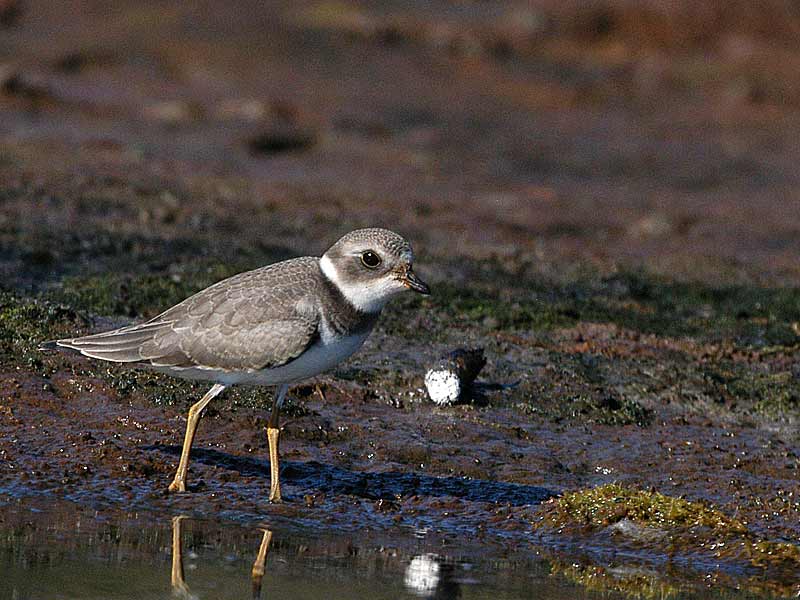 I had seen about 6 Semipalmated Plovers earlier in the day at San Malo. I was happy to see one at Holden where I could get a half-decent photo.

The mind was willing but the body was weak
My stay-at-home day ended at Mt. Washington's peak. 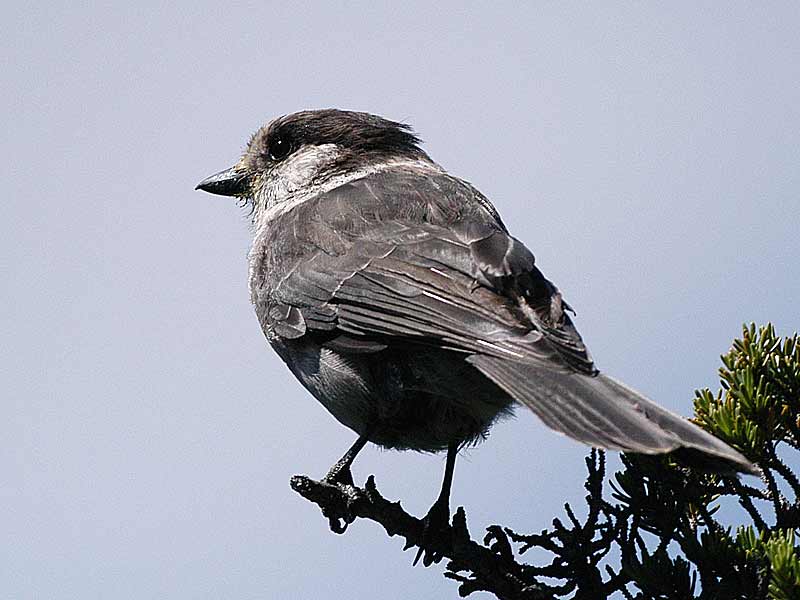 It was too fine a day to stay at home. A trip to Mt. Washington to visit the Gray Jays and maybe the 3-toed Woodpecker and Hermit Thrush sounded like a good idea. It didn't take much to convince my wife so off we went. Of course, the oh-so-friendly Gray Jays were there to welcome us. (Make sure you take some treats.)

Our first meeting place was Lake Helen MacKenzie. For the lack of a better reference point, it was near the outhouse by the junction to the Kwai Lake trail on the right. In fact, after the Gray Jay encounter we headed down the Kwai Lake trail about 200 meters as that's where the Hermit Thrush hangs out. Sure enough, we heard it by the lake but couldn't coax it out for a photo.

Continuing on to Battleship Lake, we stopped for lunch in a small clearing off the trail. Immediately we were surrounded by a host of Gray Jays. The Gray Jays earlier had been too well-fed, but these ones were ready for lunch. It was an ideal situation for a picture session. The Jays were required to pose before they got their treats. 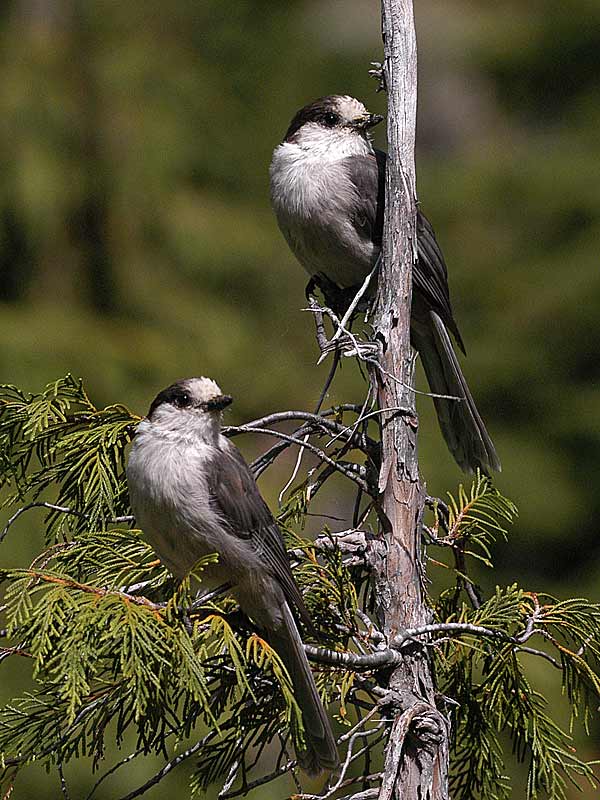 Everybody look to my right. That's it. Hold the pose. Click! That's a wrap! Come and get your treats. The rest of the day was pleasant but uneventful. There was no sign of the 3-toed. Next year I'm going drag my buddy, Barry Kerr, up there as he was with me when I saw the 3-toed in 2003.

For some reason I had the Green Heron in my mind when I tumbled out of bed this morning. Maybe I was subconciously thinking about last summer when Shelley invited me to Port Alberni to photograph the Green Heron. I decided it was an omen to visit the Green Heron again. 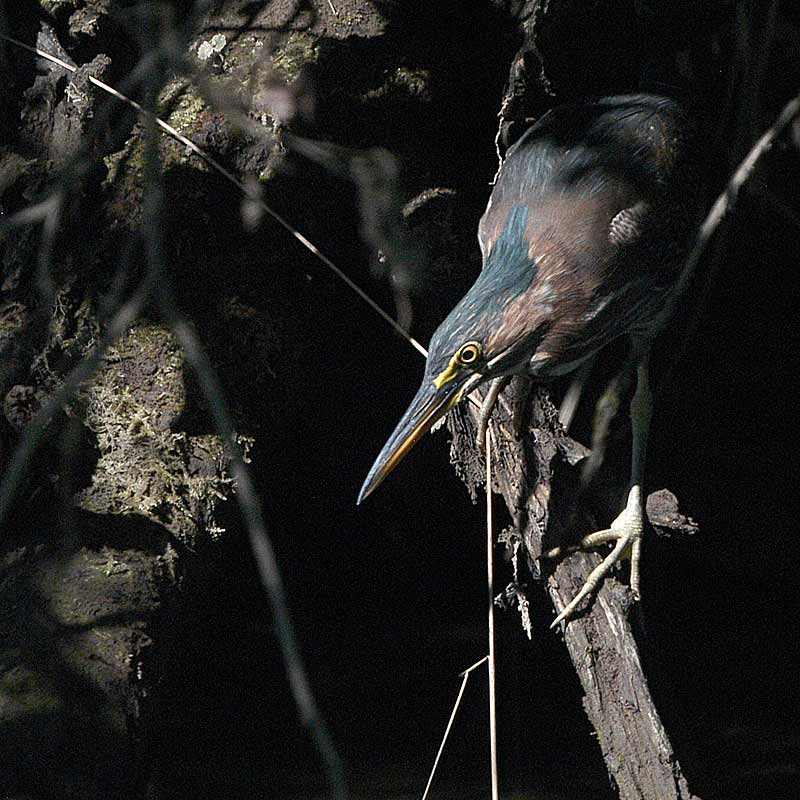 We weren't disappointed as we spotted the Green Heron within 5 minutes of arriving at Beaver Creek. It landed in a willow in the shade about 50 m from me. I clicked 4 times before it flew, but I hadn't adjusted the exposure compensation. All the pictures were over-exposed. We walked downstream searching for the bird. We finally spotted a pair of yellow legs under some overhanging branches.

The Green Heron was mostly in the shade, but we were lucky just to be able to see it. I set the camera to ISO 1600 and exposure compensation to -1.7 while the Heron demonstrated it's fishing technique. 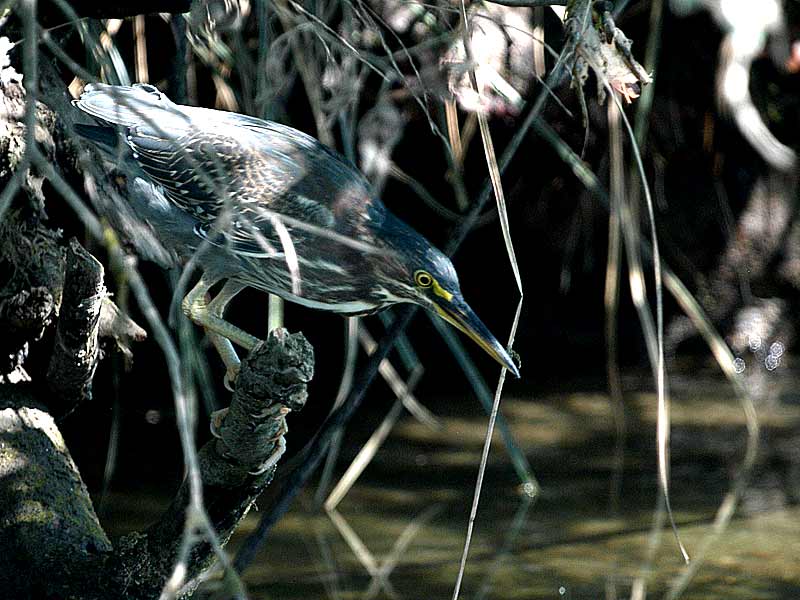 It moved to another branch for another demonstration. 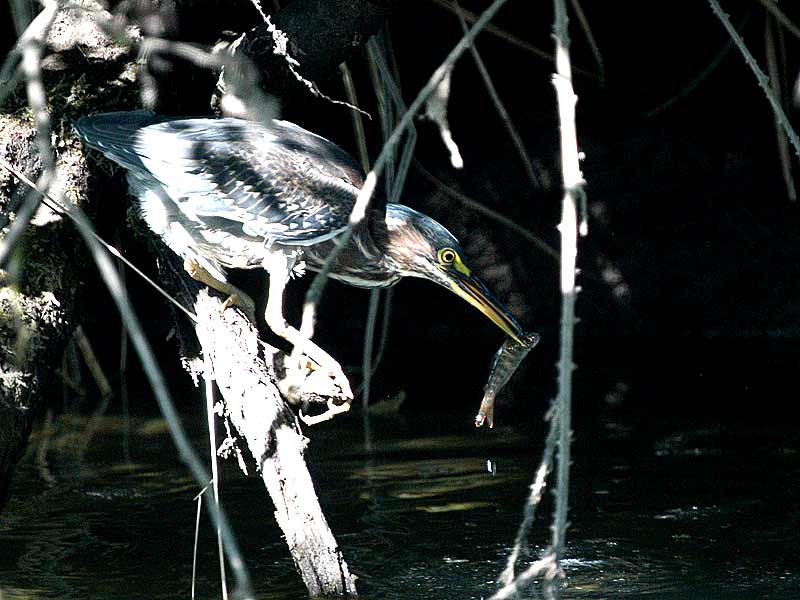 Nothing to it. Breakfast was served again. 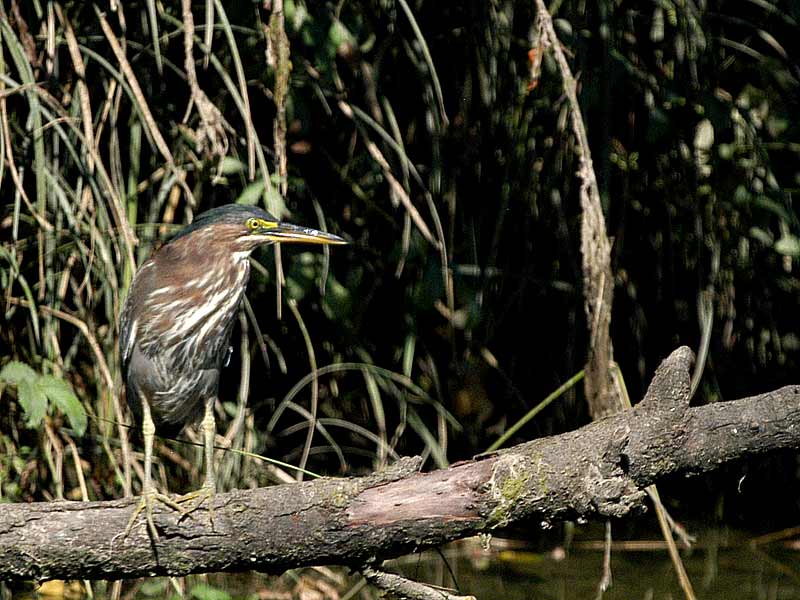 Finally the Heron flew into the sunlight about 70 meters away for a distant photo. It was a fascinating morning just to see the Green Heron in action. Thanks again, Shelley. 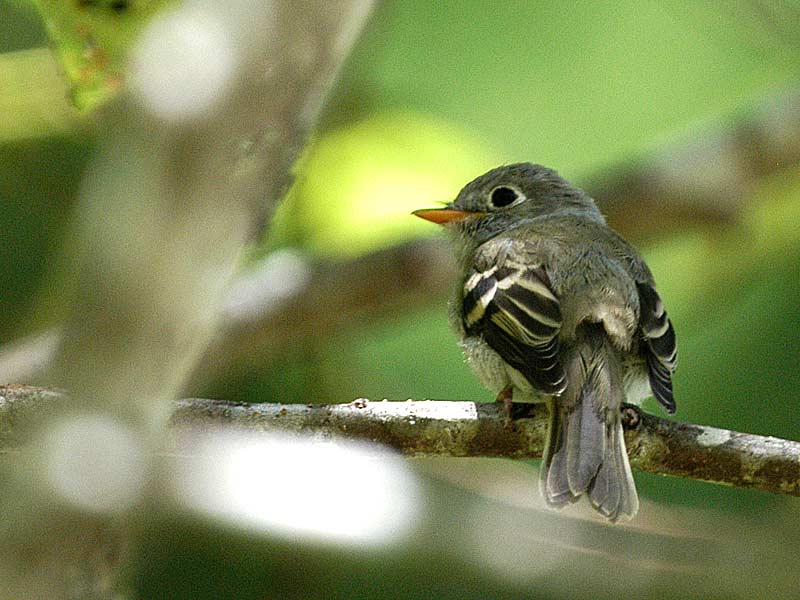 Next we drove over to Great Central Lake and had a next-to-the-car visit with Momma Black Bear and her 2 cubs. It was tempting to bring one home, but we decided not to. On the way out we stopped at the Robertson Creek Hatchery where we found some Pacific Slope Flycatchers working the alder trees. 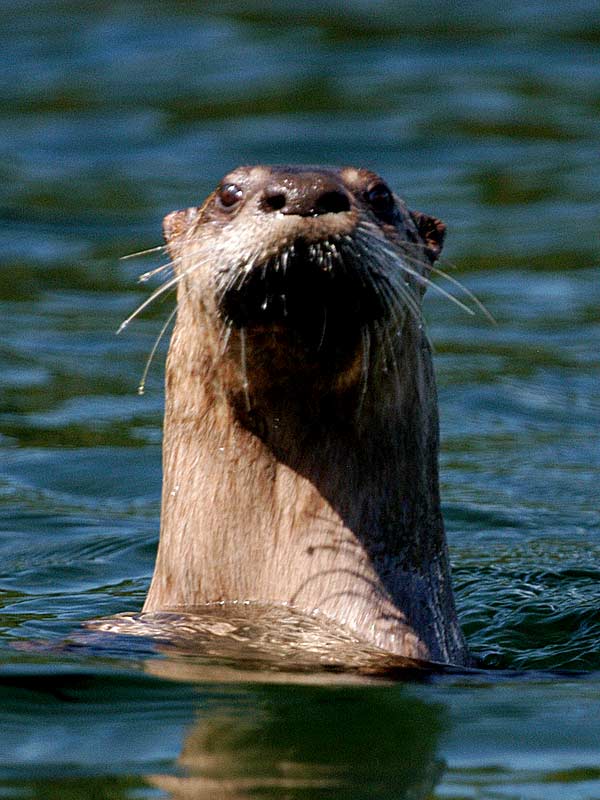 Just before we left and otter popped up where the sockeye salmon were schooling before their run up to Great central. That was it for the day. One last stop at Timmy's for iced Cappucinos then home. It was another fine day.

**Oddity - As we cruised into Port I noticed an eagle in a tree by the river and was surprised to see a nighthawk in the sky just beyond the eagle. I pulled over and grabbed the bins but was too late. It was 2 in the afternoon. Do you remember the last time I saw a nighthawk at the wrong time of day?