June 22 - It seems so sudden, but the days are now getting shorter, and yes, in a few days the shorebirds will be returning from their northern honeymoon. Two years ago on June 27/05, I photographed a Baird's and Western Sandpiper at Admiral's Lagoon as well as a Greater Yellowlegs. Meanwhile, many of my backyard birds have fledged. So far I've seen juvenile Rufous Hummers, Juncos, Robins, Towhees, Purple Finches, Hairy Woodpeckers, Pine Siskins, and Nuthatches. Cassin's Vireos and Townsend's and Black-throated Gray Warblers continue to serenade me from the tall firs while Orange-crowned Warblers flit back and forth from the holly tree to the salmon berry bushes. A flock of 30 Red Crossbills stopped by for a tree-top visit on Monday morning and a squadron of band-tailed Pigeons continue to clean up the fallen seed from the feeders.

Meetings - My first meeting was last week when I was under my car checking for an oil leak. I was slightly startled when a Pileated Woodpecker landed on a block of wood three feet from my nose. We both froze as we looked each other in the eye for about 30 seconds before it decided to check out a nearby willow tree.

I also attended three meetings as a presenter. The first two were for the Oceanside and the Port Alberni Photography Clubs. I was pleasantly surprised to see how many people were now into high level digital photography. Both groups had full turnouts of 40 and 30 members respectively. Thank goodness I was able to impress them with my camera as they all certainly knew more about photgraphy than I did. My third meeting was with the extremely well-organized Comox Valley Horticultural Society. I was impressed by the turnout of 165 enthusiastic members. They were a wonderful audience with lots of good questions. It was a pleasure to be their guest.

Of course, all these trips can provide some opportunity for birding. Unfortunately, Port Alberni was blustery and overcast. I didn't even bother looking for the Green Heron, and I missed the Red-eyed Vireos that Shelley recently photographed. I had better luck with the Courtenay trip as my stops at Arrowsmith and Deep Bay were both productive.

A Faux Pas - Remember my last Journal when I listed 3 possibilities for missing the Kestrels? Well, you can add a fouth possiblility. "Maybe Mike made a mistake with his calendar." There's egg on my face and the "yolks" on me - I was a month early - got my Kestrels mixed up with my Mergansers. Oh well, I did get some good birding in during all those trips. Enough for true confessions - time for a few pictures. 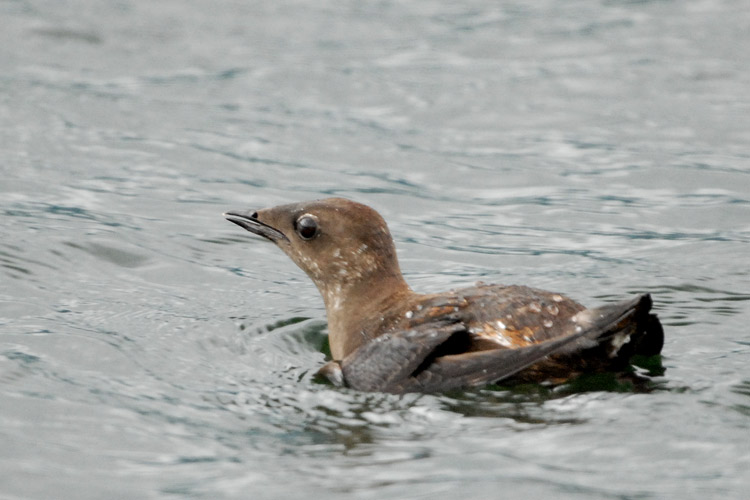 I've looked for the Deep Bay Murrelets every time I've been in the area. This was my best opportunity for a photo so far. At first all the Murrelets were too far out, but suddenly one appeared to my right. It dove as soon as it saw me. I scrambled to where I thought it might surface. I was right, but I only had a window of about 10 seconds before it dove. I couldn't quite track and focus properly but just about. There probably won't be a next time as the summer tourist season will probably keep the Murrelets away. 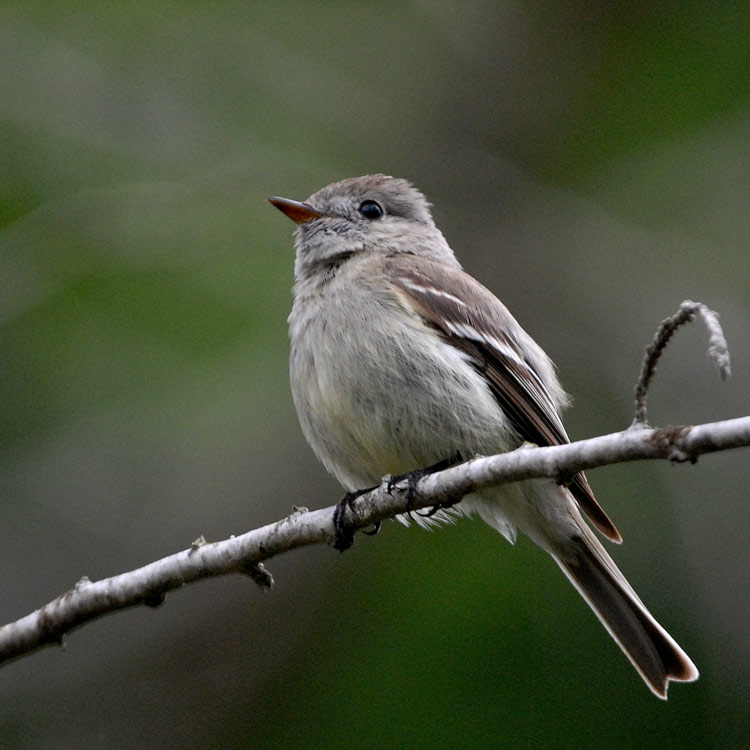 A Hammond's or not a Hammond's? That is the question. The Hammond's Flycatcher was one of my target birds. I hadn't seen one for three years, but I knew they were common to the forest near the Arrowsmith Golf Course. This was the first flycatcher I saw when I got out of my car ... 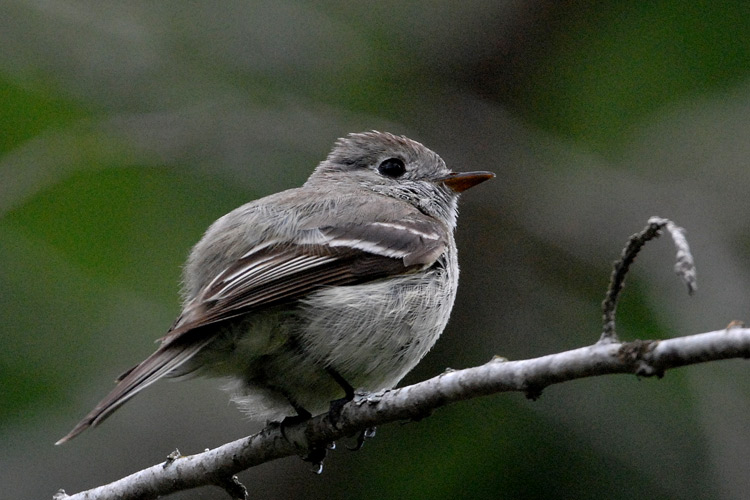 Okay, is this a Hammond's or a Pacific Slope or even something else? Here's where I have to get on the limb with the bird and make a decision. The bill can look small depending on the angle of view, but the longish primary projection and gray throat and udersides with a bit of yellow on the belly looks like the Hammond's in Sibley's. I'll go with Hammond's for now but reserve the right to change my mind at any time. (HELP!) 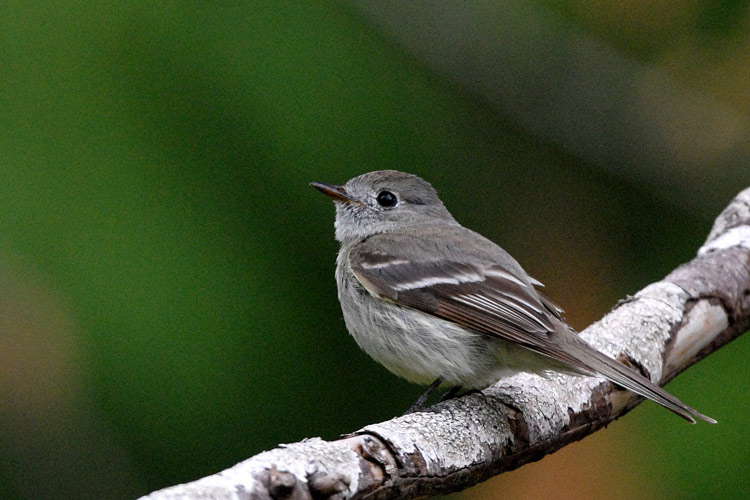 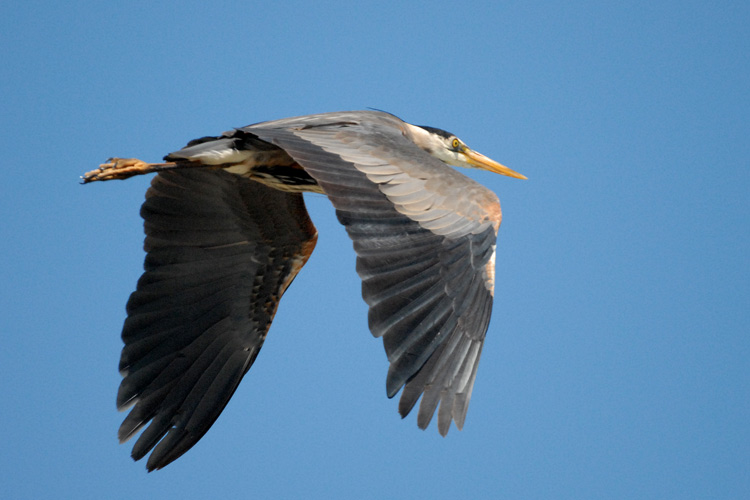 Cooperative Heron - In Comox I took a walk along Shoreline Park hoping to find a colony of Northern Rough-winged Swallows and/or a Kingfisher burrow. I did find one active swallow burrow. Maybe I'll have to go farther next time. I had to take a picture of something at Shoreline Park. The Northern Rough-winged Swallow was too swift, and the diving Bald Eagles were too far out. The Great Blue Heron was the only bird that cooperated. 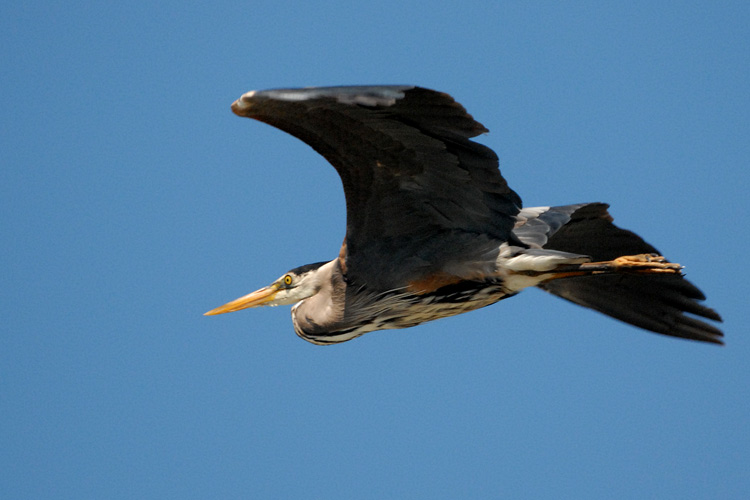 June 19 - Every spring the little pond at Rascal Lane plays host to a family of Hooded Mergansers. They arrived about two weeks ago - momma with her 8 little ducklings. Considering that the nearest possible nesting tree is over 300 meters away, it's amazing that they are successful every year.

It was a quiet day on Kaye Road, but the Chipping Sparrows seemed omnipresent. 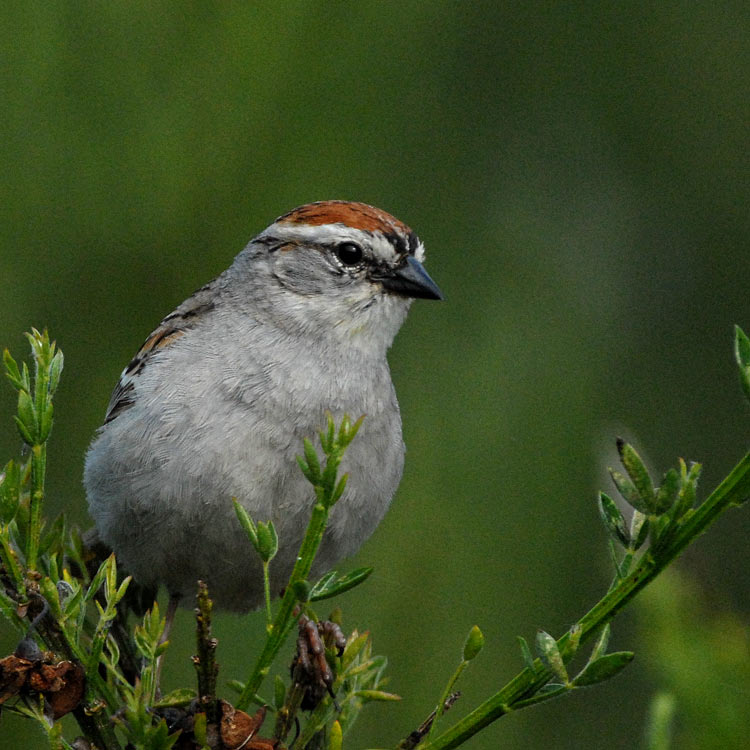 June 20 - Around Home - Sometimes I think that I should just stay at home instead of running all over the Island looking for birds. I had intended on building a bird shower for years but always procrastinated. Thinking that the Rufous Hummers would be leaving in a week or two, I decided it was time to quickly improvise one.

My first visitor was a female American Goldfinch. She loved the shower and returned for a splash and drink every 30 minutes. 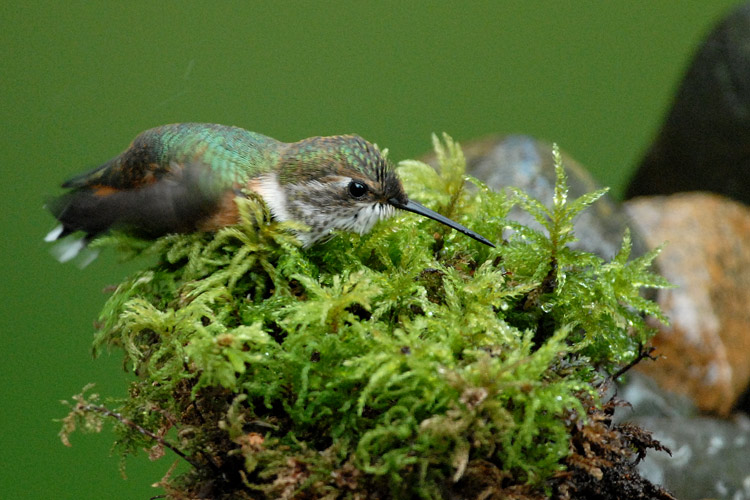 A few hummers discovered the shower, and I would say that they loved it too. 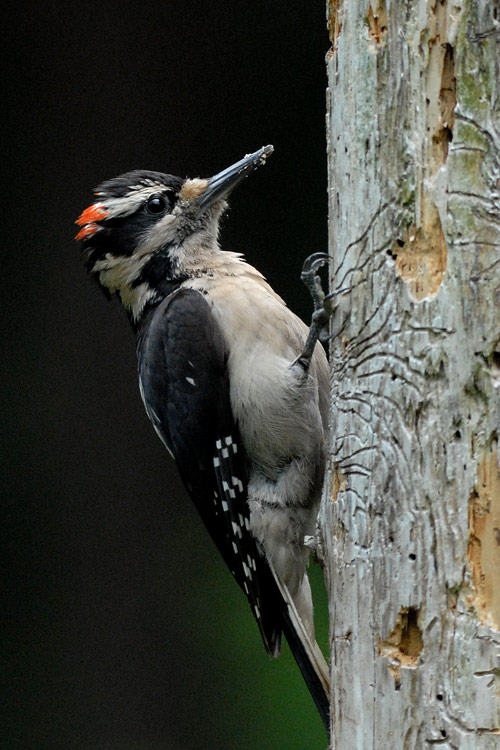 The shower was strategically located right next to my feeder pole. I didn't have to move to when the male Hairy Woodpecker dropped in for one of his regular visits. 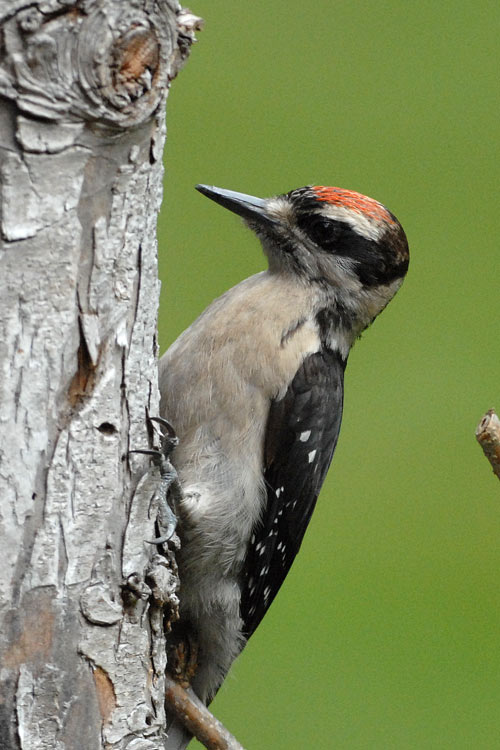 The juvenile Hairy stayed close by. I just missed the picture of pappa giving junior a little snack.

The Townsend's Warblers tease me from the tall firs every day, but I knew it was only a matter of time before they ran out of food up high and would have to visit me. Today was the day.

In the morning sun the colour of the Townsend's was brilliant.

The Townsend's was proficient at collecting bugs and worms but had time for its cheery, bouncing song.

June 21 - On the road again. My plan was to do some quick birding in the morning and chores in the afternnon. The day started well with 2 families of Common Mergansers at French Creek. My second stop was an unexpected find at the gull roost in Qualicum. I'll let the photos tell the story. 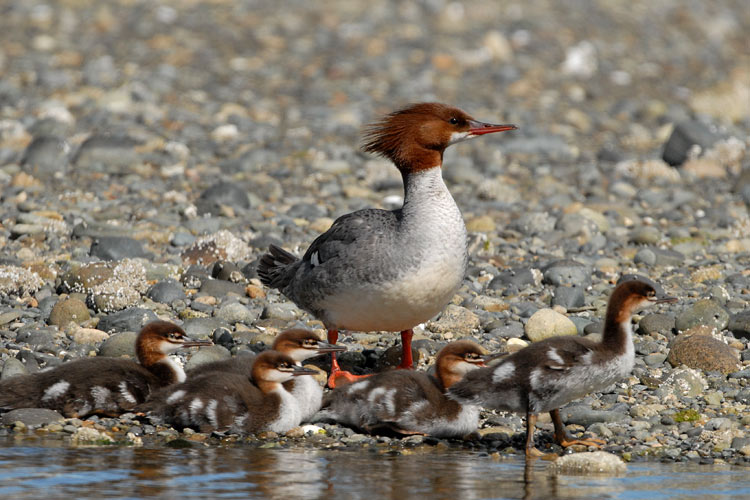 My, how they've grown, but they're still pretty cute.

I've never found the Common Merganser families at French Creek when the ducklings were younger. I wonder if I just missed them or they only show up when they're a little older.

I almost drove by the Qualicum gull roost, but something told me to stop. I'm glad I did. Two large orange bills suddenly got my adrenalin running. I had never been close to Caspian Terns before. Maybe today was my day. 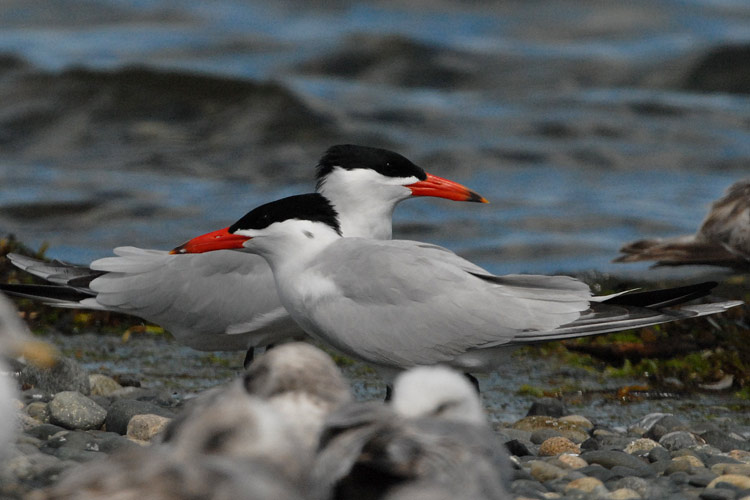 My past experience said that the terns would turn and fly when I was within 25 meters.

20 meters and they were still there. I took my time and continued my approach. 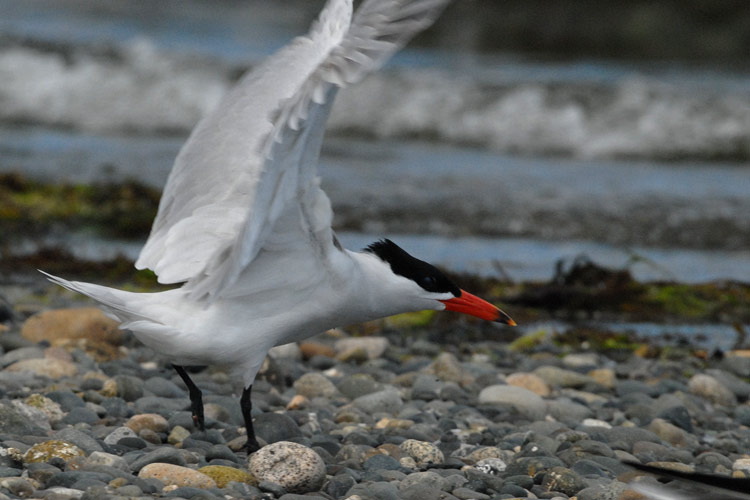 Stretching or warming the engines? I stopped and waited. The terns settled down and the gulls relaxed. 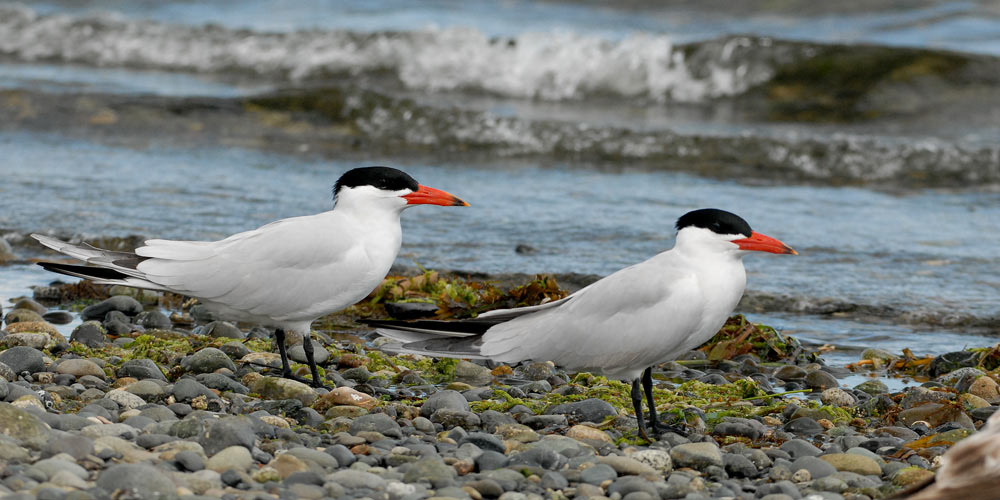 10 meters. I couldn't believe it. The terns showed no signs of panic, and I was as close as I wanted. I had all the shots I wanted - about 100. Time to move on. Thanks Caspians! 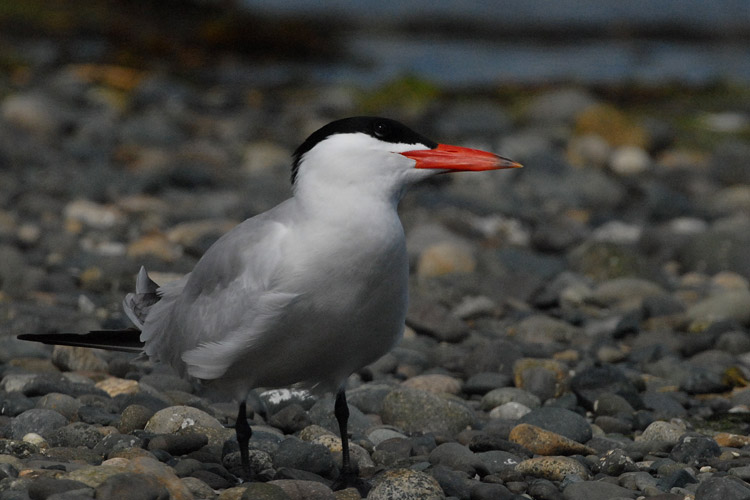 Swainson's Time - I was actually revisiting the possible Hammond's Flycatcher, but it didn't stay around. Another bird did. It was the secretive Swainson's Thrush.

I had seen one or two in the same spot three days ago and heard a lot of peeping. Maybe there was a nest nearby that the adults were tending. 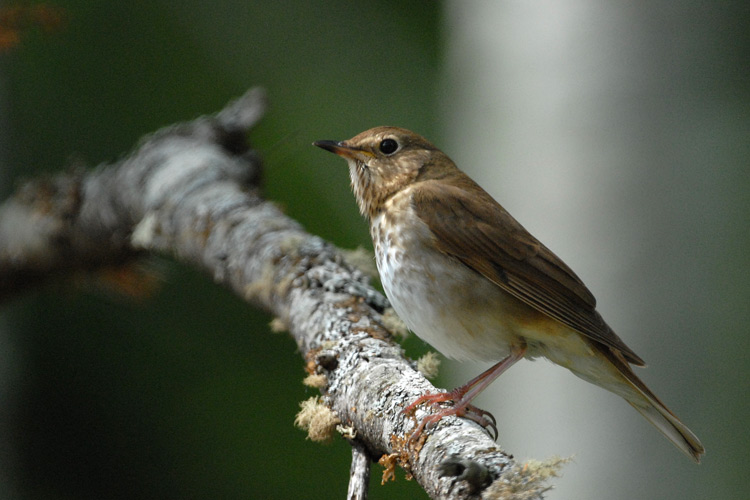 As I waited the Swainson's appeared close by several times. A stump pile seemed to be a favorite foraging and resting spot.

Funny how things work. When I was looking for a Swainson's, they would never show themselves. When I wasn't, they were all over the place. 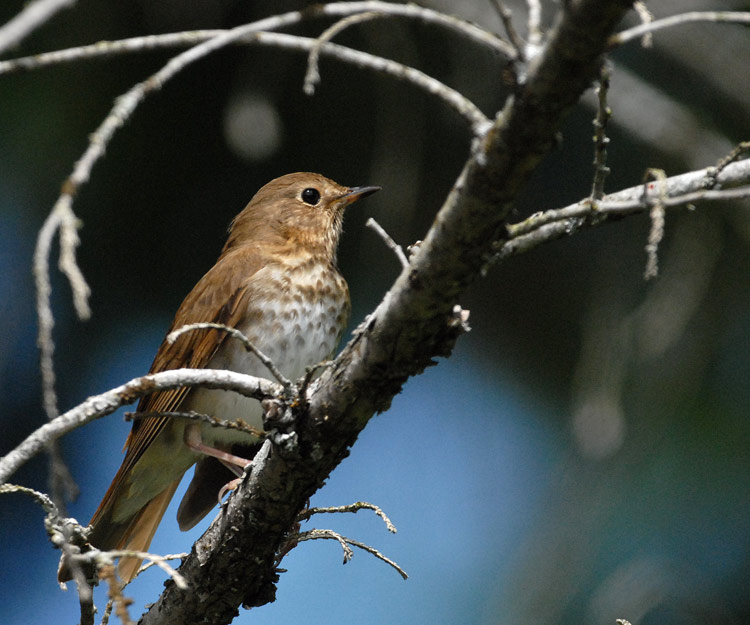 While I was waiting for a hummer, a female Purple Finch enjoyed the shower and perched on a branch to dry.

Hummer Fun - I knew the hummers would love the shower as they always took advantage of the spray when I was hand-watering the garden. 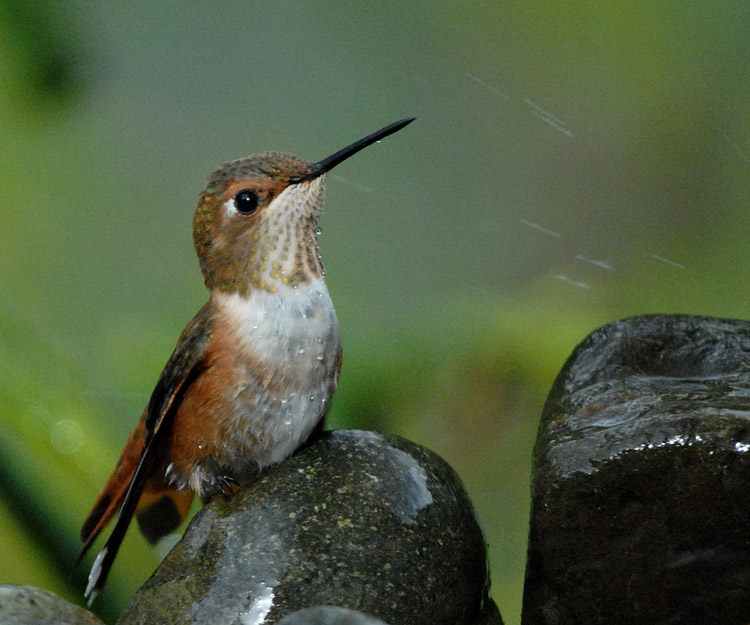 I was disappointed that in an hour, not one hummer came to the shower. I decided to give it five more minutes. I was in luck as I finally had a visitor. 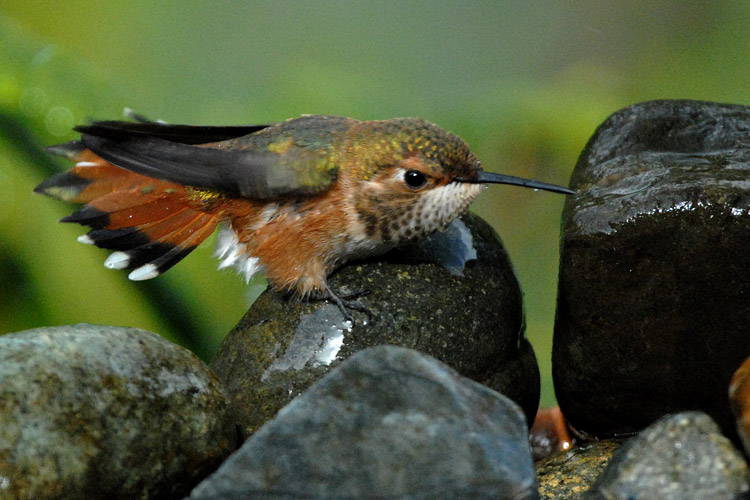 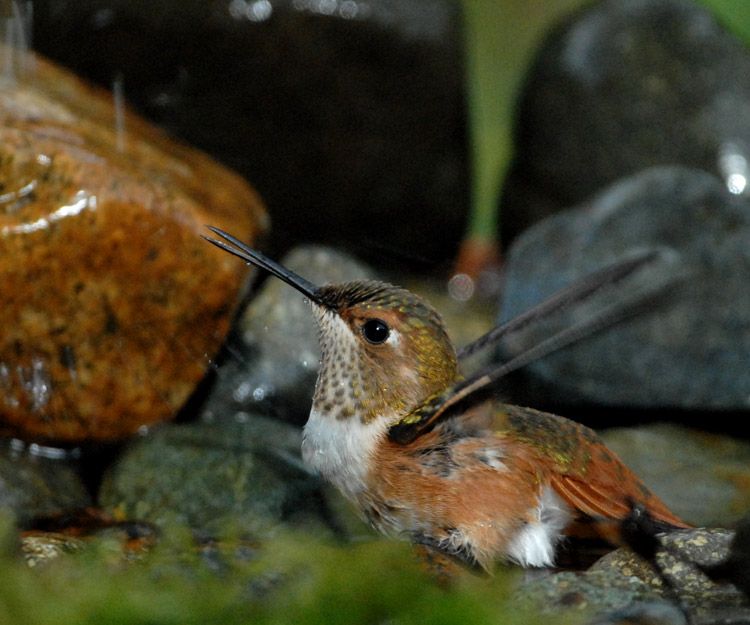 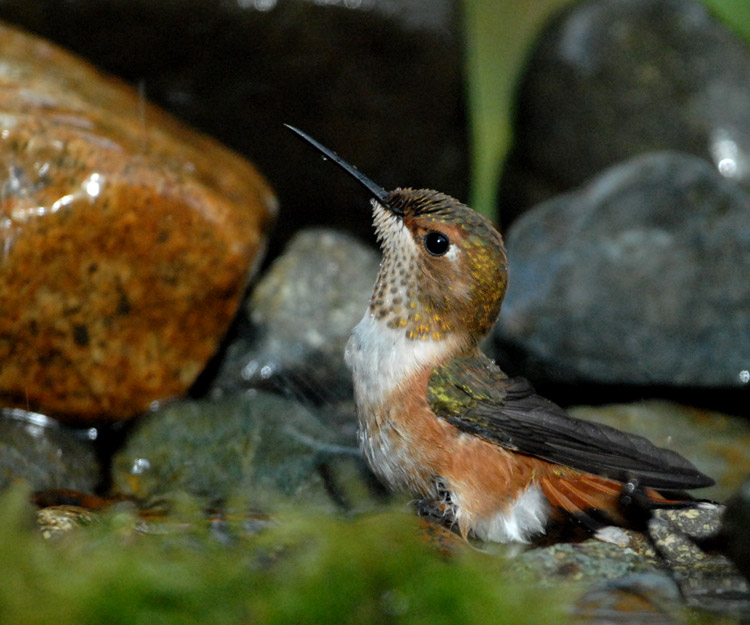