Sept. 14, 2008 - Sun, sun, sun! We're in the midst of an unusual but marvellous Sept. heatwave. Unfortunately, all good things must end and clouds and showers are scheduled for the midweek. The conditions have been great for photography, but the birds have been scarce. I've heard a few unusual bird calls and sounds in the early morning when it was still too dark to investigate. The only one I recognized was the, "Who cooks for you?" of the Barred Owl which gave me the wake up call last Sunday (Sept. 7). The only interesting birds reported around here lately were a pair of American Golden-Plovers found and photographed at San Malo by Richard M. I didn't have any luck finding them a few days later, but Christopher S. did find them again two days ago. However, I couldn't waste the sunshine and blue skies so I took advantage of a few regular cooperative birds like the Black-bellied Plovers, Bonaparte's Gulls, and Red-tailed Hawk. I also made a couple of pleasant road trips which were short on birds but very enjoyable in terms of scenic beauty and relaxation. (above photo: Chrome Island Light Station near Denman Island)

I never get tired of watching and photographing the Bonaparte's Gulls.

The best time to photograph the gulls is when they are roosting and just lazily flying back and forth along the shoreline.

The passerines continue to pass, but they've all been too quick for me. My closest opportunity was a female Western Tanager near the Englishman River down Plummer Road.

It's always a joy to find a sunny and fogless day on the west coast and today was one of those days. With no industrial pollution around the blue sky is really blue and you can see for miles. Our first stop was the marina to look for a black bear to photograph. It was a bad news good news situation with our bear search. The bad news was that we didn't find any bears to photograph. The good news was that we didn't find any bears to photograph. Are you still with me? You'll understand when I tell you the rest. Two days later in the exact spot, a black bear swam over to the marina, climbed onto a boat, and proceeded to maul a fisherman. Two other fisherman tried to pry the bear off with gaffs to no avail. Finally, a third person was able to dispatch the bear with a knife. Can you visualize me trying to fend off a bear with a Nikon D200 camera?

A New Bird - They were high in the sky, but they didn't look like Black Swifts. Looking at my record shots, I think they were my first Vaux's Swifts.

A few swirled around just before the bridge to Port Renfrew and then they were gone. (Please let me know if they aren't Vaux's.)

It was fun to see a family of immature Harlequin Ducks at Botanical Beach. They were sunning themselves on the rocks until I got too close.

An Otter For Lunch - After a couple of relaxing hours at Botanical Beach, we decided to retreat to the hotel for lunch on the sunny deck.

Half way through my fish 'n chips, I noticed a river otter foraging near the wharf.

The otter was dining on baby sole.

Sept. 9 - A Columbia Beach Morning - The last morning I spent on Columbia resulted decent photos of the Ruddy Turnstone and Parasitic Jaeger. I wasn't so lucky this morning, but it was still a gorgeous day to be out.

As usual the most common bird was the Black-bellied Plover.

There have been more Heermann's reported on the mid-island this year than ever before.

Another Columbia Beach regular is the resident Merlin. It just loves terrorizing the shorebirds.

You can usually find a pair of Ring-billed Gulls at Columbia. I would also classify them as "residents" as they seem to be around most of the year.

It's pretty hard to miss the Ring-blled at this time as it's the only gull with bright yellow legs. The adult Mews and Californias also have yellow legs, but it's mostly the juveniles seem to be around right now.

Of course, the ring on the bill is main distinguishing feature.

I never seen a Turkey Vulture on the sand bar before.

The shorebirds and gulls sure scattered when the Turkey Vulture landed.

Goin' Crazy - I was in the bank to pay some bills last Thursday. After the bills I checked with Brenda, the super receptionist, for an appointment with an advisor. That's when I started looking for my glasses. I was sure I had them in the bank, but between Brenda and I, we couldn't find them anywhere. I left the bank I back-tracked to everywhere I'd been and finally resigned myself to the fact that I had lost my mind and my glasses. So what's all this got to do with birds? Patience - I'm getting there. Three hours later, Brenda called, "Guess what, Mike?" "My glasses," I replied hopefully. "Yes, some lady picked them up by mistake and just returned them," she chirped happily. Ok, the bird. As I was heading back to town a Red-tailed Hawk landed right in front of me beside Springford's Farm to grab a road-killed eastern cottontail. It flew into the farm and landed on a post when suddenly a Common Raven materialized out of nowhere and started dive-bombing the Red-tailed. I have permission to drive into the farm so that's what I did. The Raven took off as soon as I got near, but the Red-tailed stayed and gave me photo op before flying to the nearby trees. It was the closest I've been to a Red-tailed in years. If it hadn't been for the lost glasses, I would have never had the photo op with the Red-tailed.

After collecting my glasses, I popped into Admiral's Lagoon to see if there was any action. The best I could find were a few Blackturnstones flying back and forth to the sandbar.

As the tide was rising, a flock of Black Oystercatchers landed on the sandbar. It's a fairly predictable scenario as the sandbar at Admiral's is the highest roosting spot in the area.

Sept. 12 - Finally, Sidney Spit - Sidney Spit has beckoned for several years, but the opportunity or maybe the will to respond never materialized until this week. I was pleasantly surprised when I mentioned Sidney Spit to my wife on Thursday evening. Without hesitation she responded, "Let's go tomorrow." I didn't give her a chance to change her mind. It was one of those "spur-of-the-moment" decisions motivated by the fine weather, an aversion to chores, and the possiblity of a few birds. The next morning we packed a lunch and were out of the house by 6:30 AM and on the Sidney Spit ferry at 9:30. Twenty minutes later we were hiking on the spit and enjoying the panorama of sparkling blue water, little green islands, boats of all sizes passing in various directions, and regular fly-overs of Double-crested and Pelagic Cormorants.

Just as Ted A. reported, there were Lapland Larkspurs. I found a pair along the east side of the spit.

The female Lapland is more pale than the male especially in the head and chest area. The broad streaks on its flanks are faint compared to the male.

The female is also very pale above the eye and behind the neck.

They are a very pretty bird, and relatively cooperative for photography.

In contrast to the female, the male has a rich golden brown colour above its eye and behind its neck.

The male also has a black pattern on its chest and dark streaking on its flanks.

Peep Parade - After the Longspurs I spotted a familiar pattern of "Now you see me, now you don't." It was a flock of about 100 peeps.

As it turned out, most of the peeps were Western Sandpipers

They landed on a patch of wet sand about 20 meters from me.

With the tide coming in, I expected them to be gradually pushed closer to me.

They took flight several times but always returned to the wet beach in front of me.

Usually the flight is precipitated by a predator but there was none in sight. Maybe they do it for practice just like a fire drill. 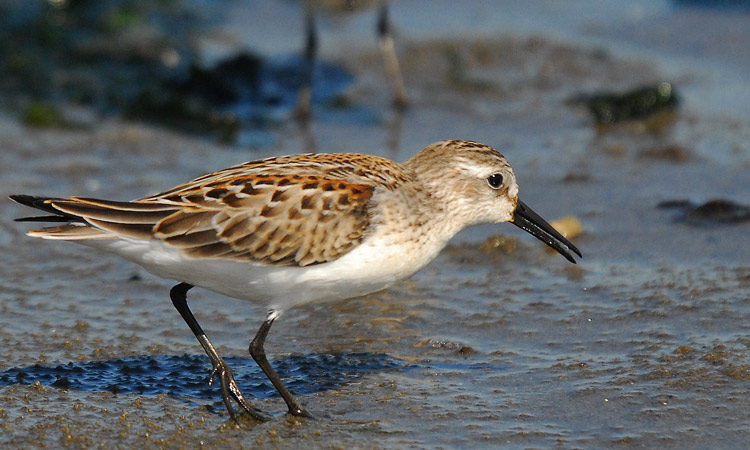 Finally, the flock was right in front of me. I didn't need the telephoto for a close shot.

Out of the 100 peeps, I think there was one Semipalmated Sandpiper. It was noticeably smaller than the Westerns and had no sign of rufous colouring on its scapulars. There were no least Sandpipers in the flock.

As I was hustling back to the forest area to look for my wife a sudden movement in the gravel caught my attention. I stopped and spotted 1, 2, 3 Baird's Sandpipers. I had looked for them on the mudflats with the peeps but didn't expect them in the rocks in the middle of the spit.

The Baird's were quite obliging as they seemed to prefer crounching down to hide as opposed to fleeing.

Their cryptic colouration did blend in quite well with the rocks.

Last but not least, the Sidney Spit Song Sparrow was a very friendly and cheerful bird as it followed me down the beach. I was surprised to see it behaving like a trained dog staying 2 to 3 meters beside me for about 20 minutes before I headed back to the wharf.