Sept. 27 - As I've mentioned previously, it's been a disastrous year for book sales. That has meant less birding as many of my trips up and down the island are usually for b & b (books & birds). I don't expect the situation to improve, but the past week was good to me. First, Graham's Jewellers in Courtenay called for a box of books. As strange as it seems, they've always been my best outlet. That gave me a chance to check out the Lewis's Woodpecker in Courtenay discovered by Art Morgan on Sept. 19. Second, Bolen Books in Victoria called on Thur. to give me a reason to do some south island birding on Friday. I couldn't have planned the week any better - sold a few books, found a few birds, and caught some decent weather. Like I said, I don't expect the book situation will improve, but I'm hoping for a little pre-Christmas surge. That reminds me, I better apply for a couple of craft fairs. 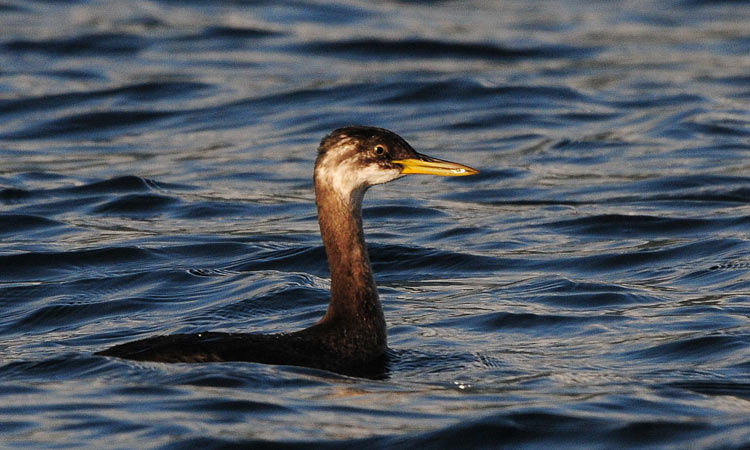 I rarely make the trip north without stopping at Deep Bay. Today was no different. Despite the blustery winds in Qualicum, Deep Bay was relatively calm. The first bird I saw off the spit was a Red-necked Grebe, a common species for the area. I quickly set up the tripod and camera for a few shots and was ready to shoot when a black lab came up behind me and started barking like crazy. I saw the owner down the beach but he made no effort to call his dog. Meanwhile the grebe quietly slid out of range, and I was left with a few well-cropped images. 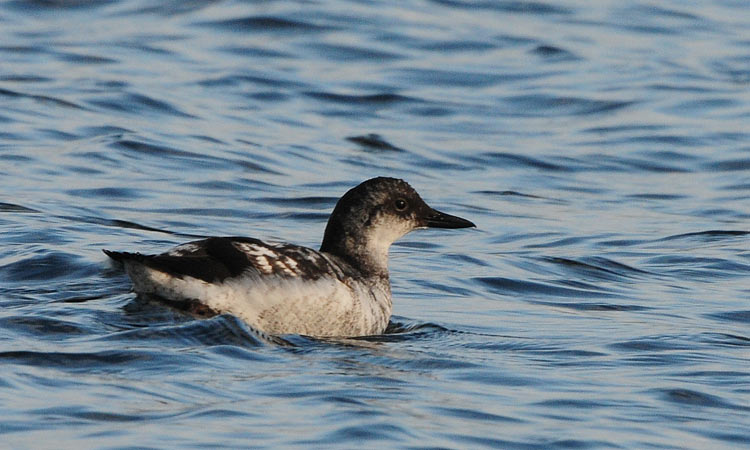 Further down the beach I spotted the resident Common Murre, but the dog continued to bark and all I got was another distant shot. The Common Murre isn't an abundant species in the area, but there is usually one that hangs around the spit. A pair of Horned Grebes were close to the murre, but they also headed out thanks to the noisy hound.

After the irritating experience at Deep Bay, I was happy to make my delivery in Courtenay and then tend to a little peaceful birding. It was my good fortune to encounter John R. who was kind enough to point out the Lewis's and show me around. On our little tour of the conservation property we were treated to two low-flying flocks of Sandhill Cranes.

The cranes came in from the north and then turned towards Cumberland. 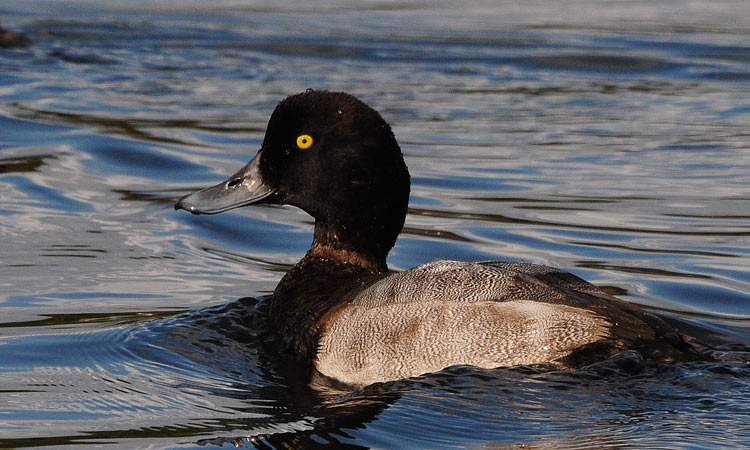 Our first stop was the pond. There were several duck species paddling around. The closest were three Greater Scaups. I managed a couple of photos before they paddled out of range. Other ducks included Northern Shovelers, Hooded Merganser, American Wigeon, and Mallards. The two resident Trumpeters were sleeping on the water at the far end of the pond. A quick scan of the duck roosting spot didn't reveal any shorebirds. 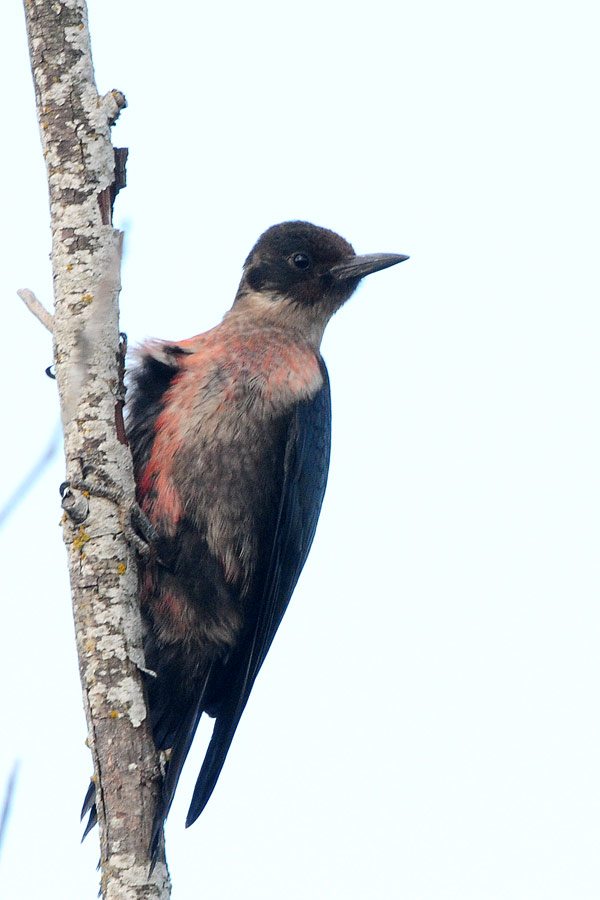 Finally, it was time for the Lewis's. I had seem one two years ago Keremeos, but it was raining and I never had a chance to take a photo. 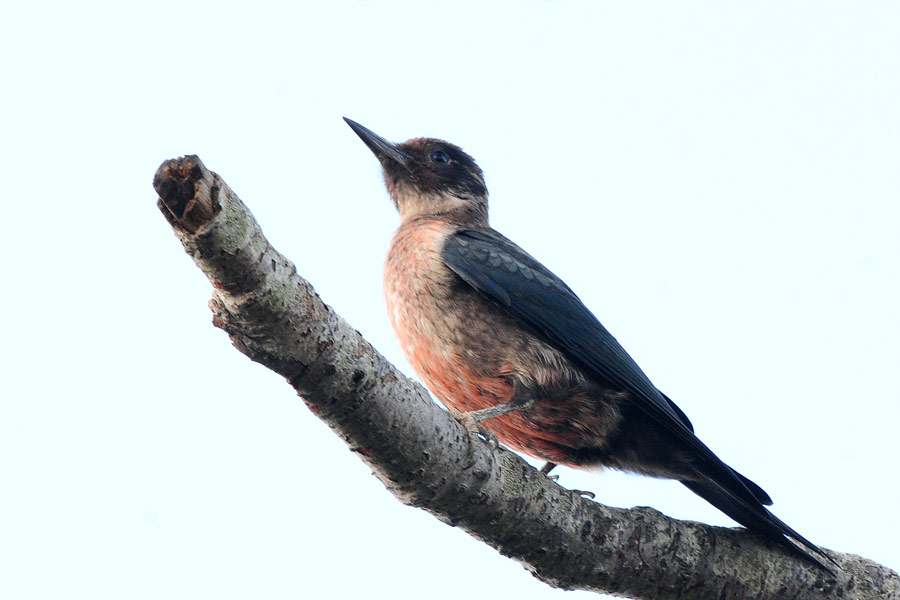 The Lewis's was busy hawking insects from a snag. It would fly out, grab an insect out of the air, and return to the snag. It was relatively cooperative, but I couldn't get close enough for a fuller-framed shot, and I never got a good focus on any of its fly-catching. 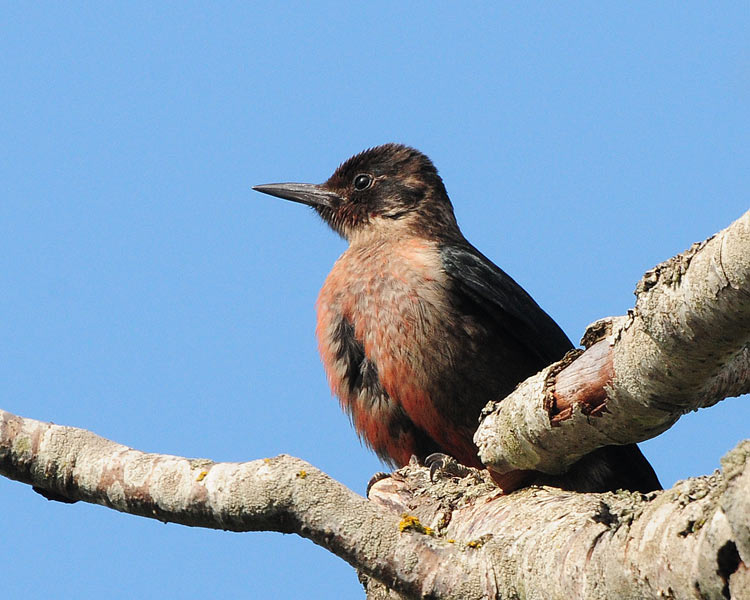 At one time (over 50 years ago) the Lewis's was a breeding species on Vancouver Island and the Lower Mainland, but habitat loss probably accounted for the extirpation. 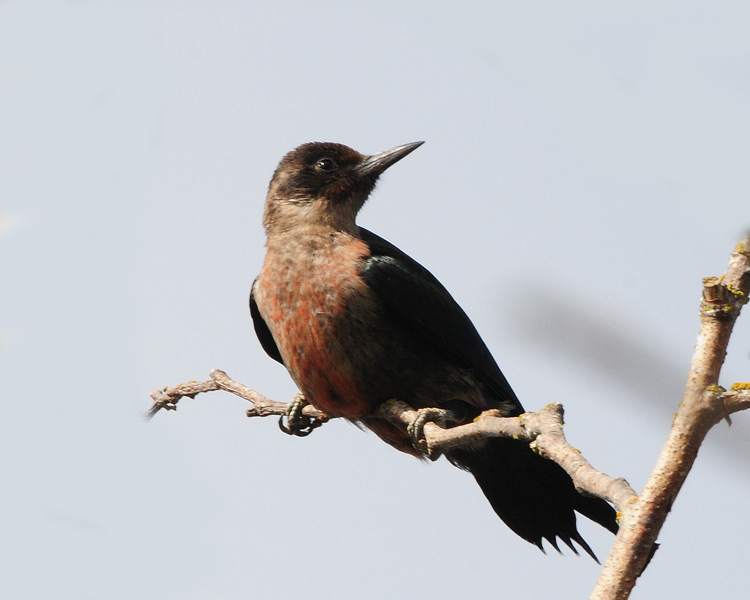 Without the Lewis's, there are still six woodpecker species regularly found on Vancouver Island.

The Lewis's was a wonderful birding treat. According to the Comox Valley checklist there have only been two other local sightings in recent years. One was reported on Hornby Island in August, and it wouldn't be unreasonable to suspect that this is the same bird.

Sept. 30 - Despite the forecast for clouds, showers, and sun, this was my window of opportunity for a little south island birding. As mentioned, I had a few books to deliver to Bolen, and I also had a camera that I wanted cleaned at Victoria Camera Repair. They have always taken good care of my cameras, and they have always been pleasant to deal with. Oh, a bonus is that they let me display and sell my books there, and they just happened to be out of stock. That more than made the trip south worthwhile. If I managed to find a bird or two, it would just be the icing on the cake.

Since I was already downtown, I decided to check out Clover Point first. The parking lot was surprisingly almost empty and there were only a couple of walkers and dogs around. It seemed to be a good time for birds, but I never counted on high tide. The only birds around the shoreline were gulls. Amongst the sleeping flock were six Heermann's Gulls. I always enjoy seeing them. Since I haven't been down here this year, it was actually my first sighting of the year. They'll be heading to California soon so I was glad to see them. Next stop, Cattle Point. 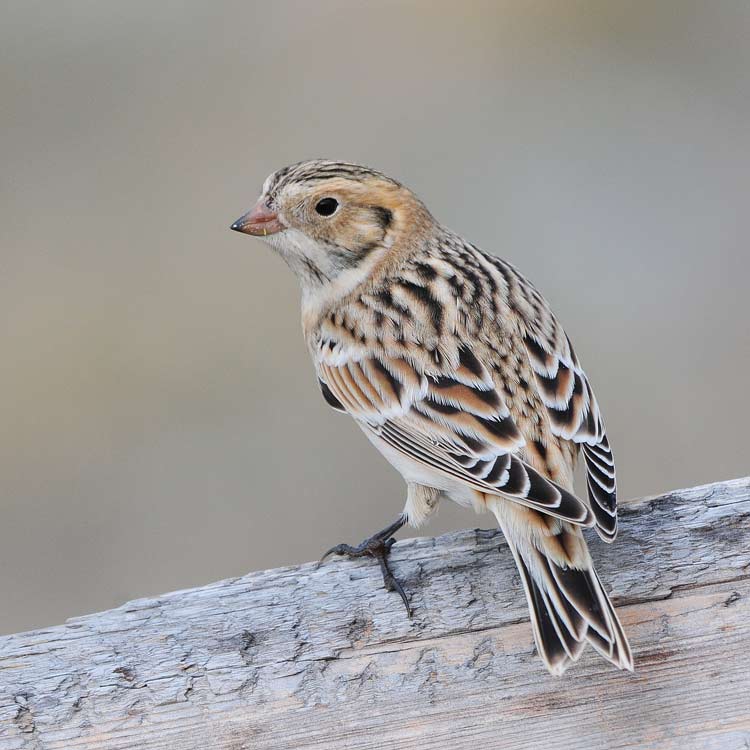 Cattle Point was also very quiet. Just as I was about to start my tour, a kindly gent named Roy mentioned there was a Snow Bunting with the Savannah's. That brightened my spirit right away because my success rate at Cattle is very low. Mind you, on my last two visits in the early spring I scored six Rock Sandpipers, and then two Western Meadowlarks so I'm not complaining. After carefully working my way across the point I was disappointed only to see a couple of Savannahs, but on the return I was delighted to spot a Lapland Longspur. I wondered if this was the bird Roy had reported. 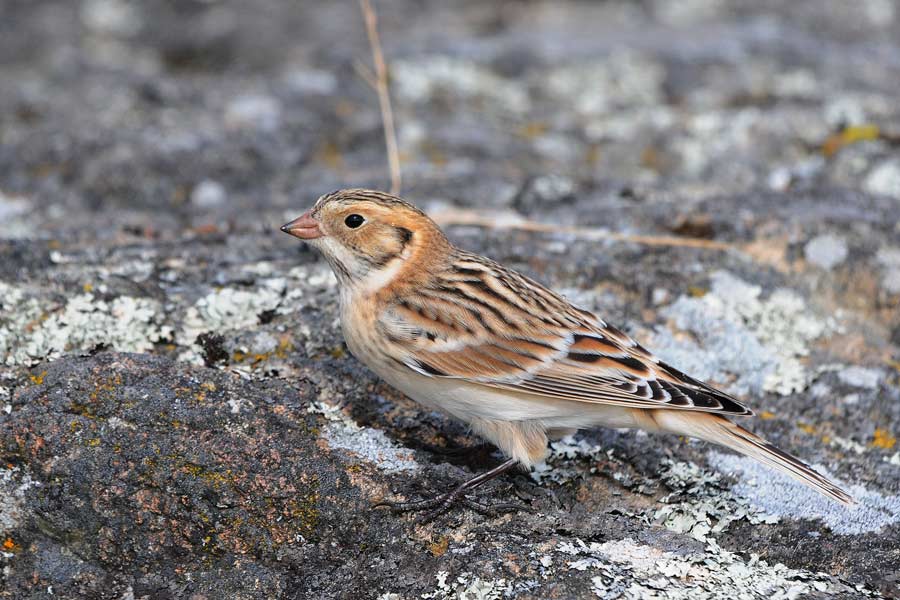 Typically Lapland Longspurs are very cooperative, and this bird was no exception. It's main concern was just to forage for seeds. 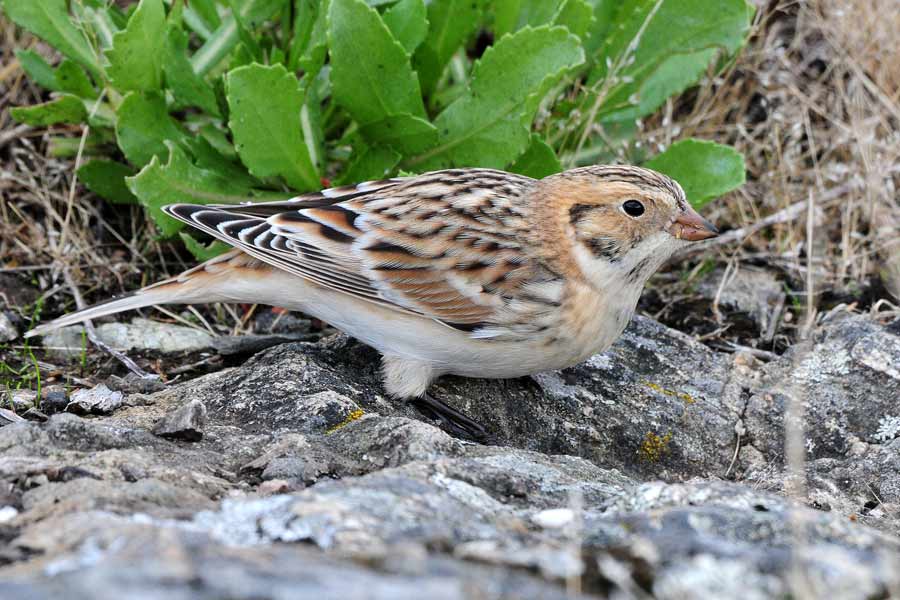 The main problem was that I was often too close to the bird and had to wait until it moved further away. I could have moved too, but I was trying to limit my movement as much as possible. 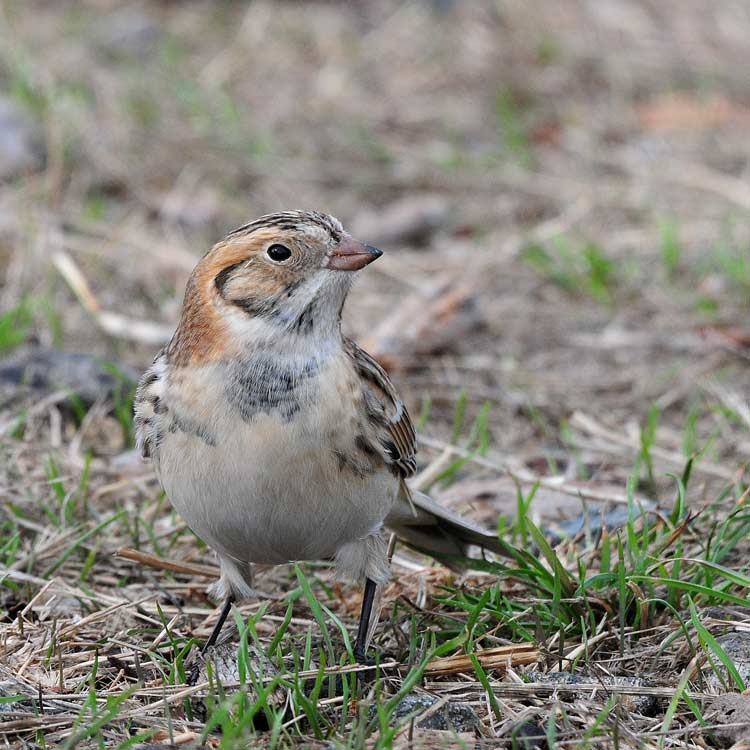 I hadn't seen a longspur since Sidney Spit two years ago so this was a an unexpected treat.

After a lengthy session with the longspur a large flock of Surfbirds flew in from the east.

At first they kept their distance, but eventually they grew used to my presence and proceeded to forage in the seaweed. 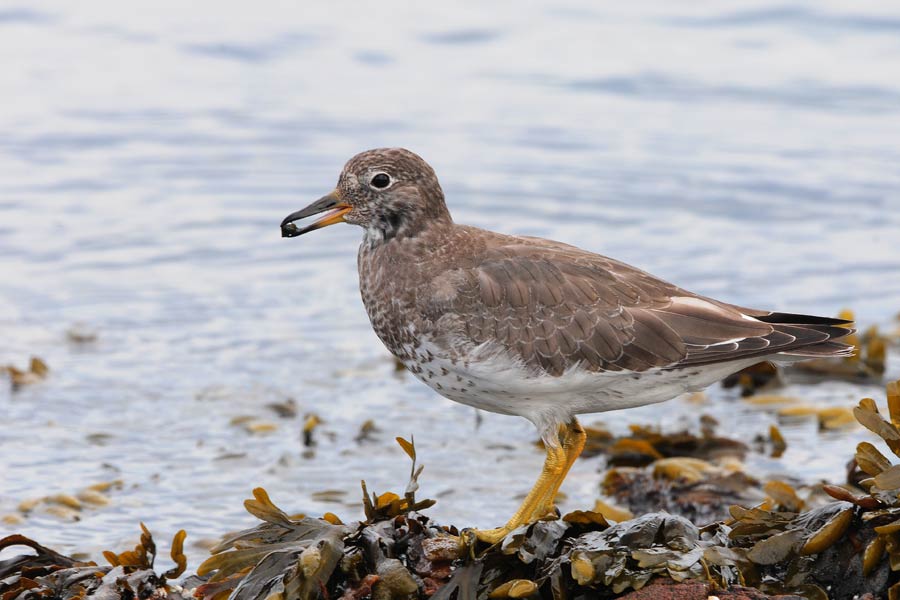 I'm not sure what the Surfbird has in its bill, but it seemed to be a common item on the menu.

What's everyone looking at? Five river otters were just passing by. 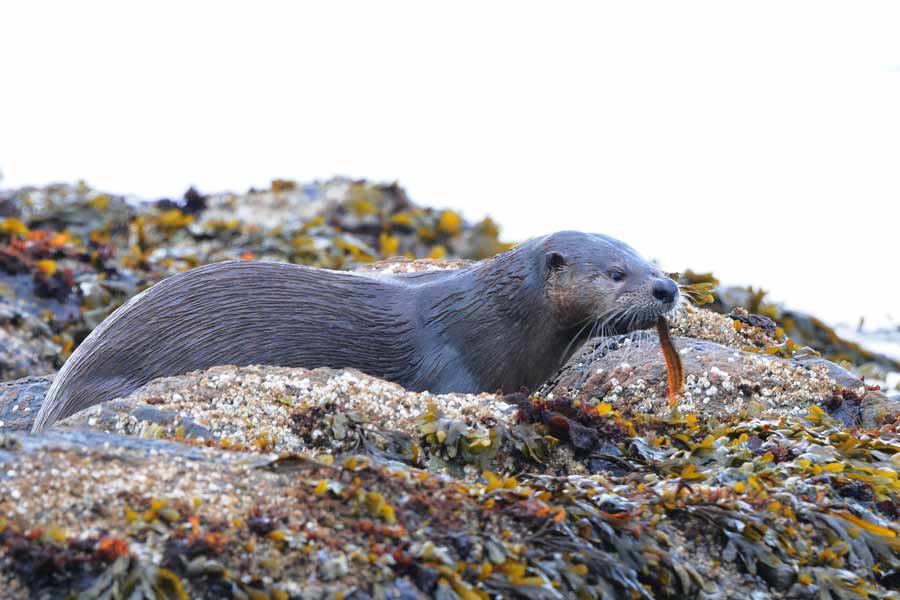 The river otters seemed to have no problem feasting on gunnel fish as they headed east. 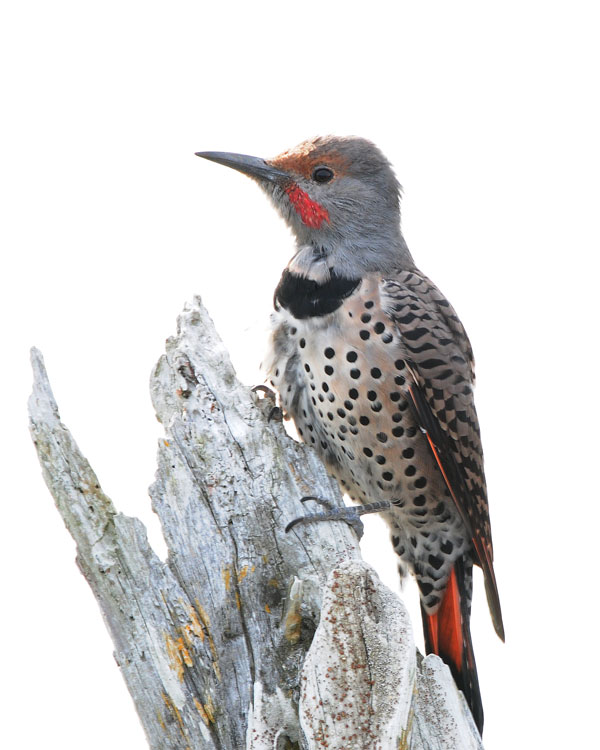 I had couple of hours to spare before heading home. I flipped a coin for Swan lake or Esquimalt Lagoon. I wasn't surprised that the coin let me down. I would learn later that Ian C. was busy watching Virginia Rails, Soras, and an American Bittern at Swan lake while I was striking out at the Lagoon. In desperation I decided to photograph a few common birds like the Northern Flicker. 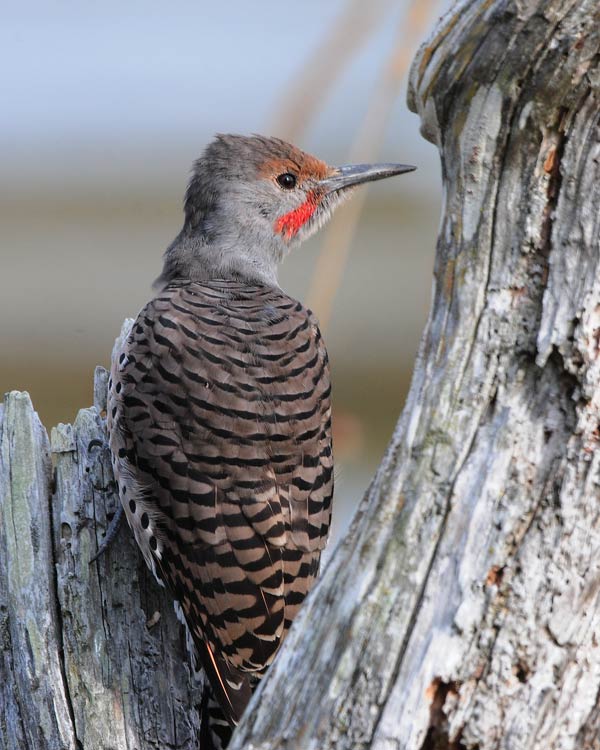 No offense to the flickers. I enjoy seeing them any time, but that's not what I wanted at the lagoon. 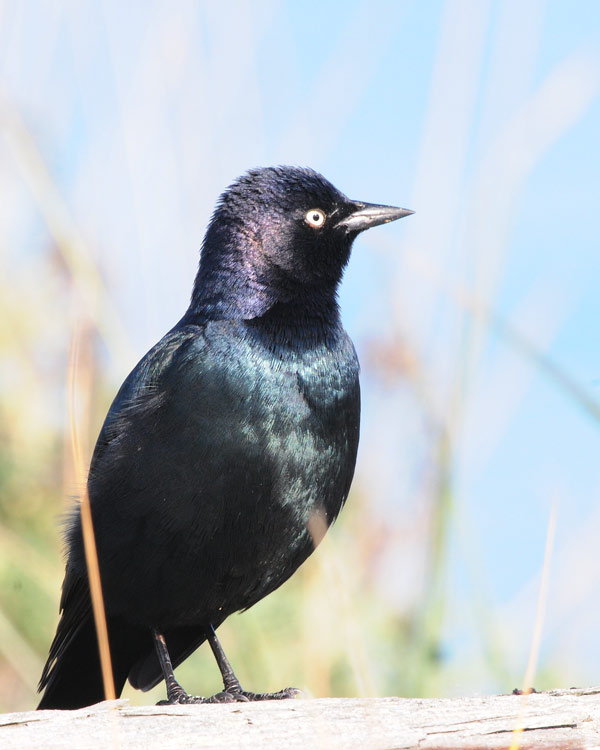 I checked out a few blackbirds hoping for somthing unusual, but had to settle for the Brewer's. 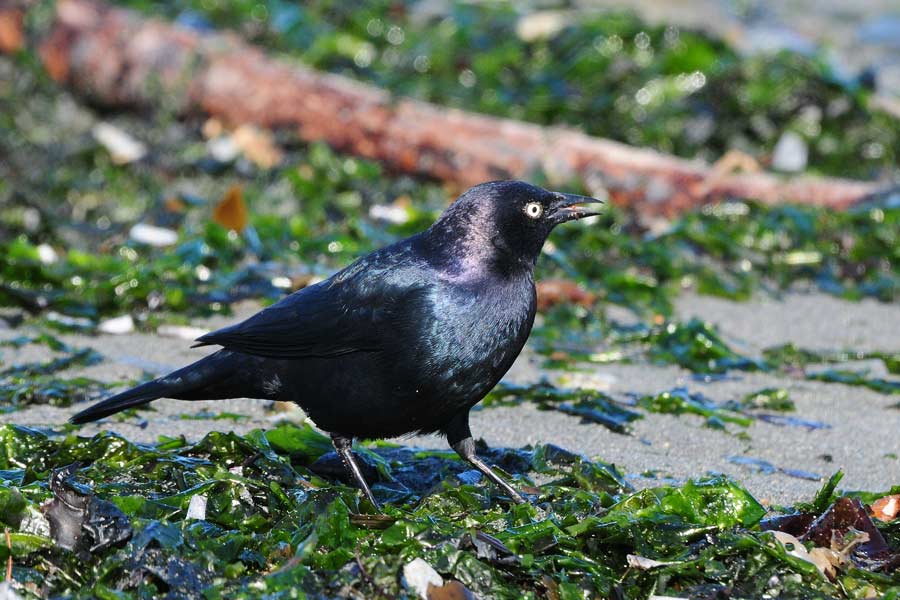 A Brewer's even tried to imitate a shorebird down at the tideline to cheer me up. I was thankful, but not impressed. 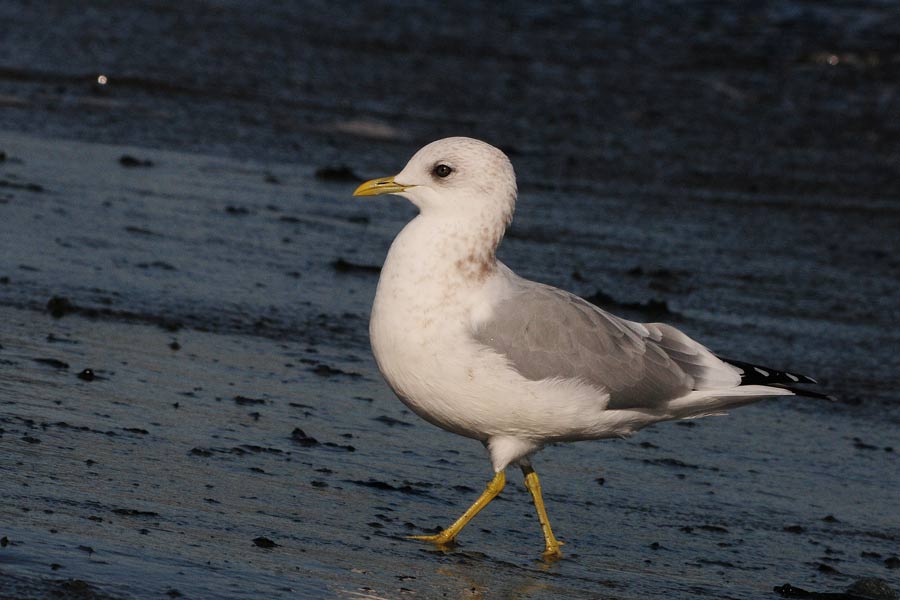 Mew Gulls were common along the shoreline. 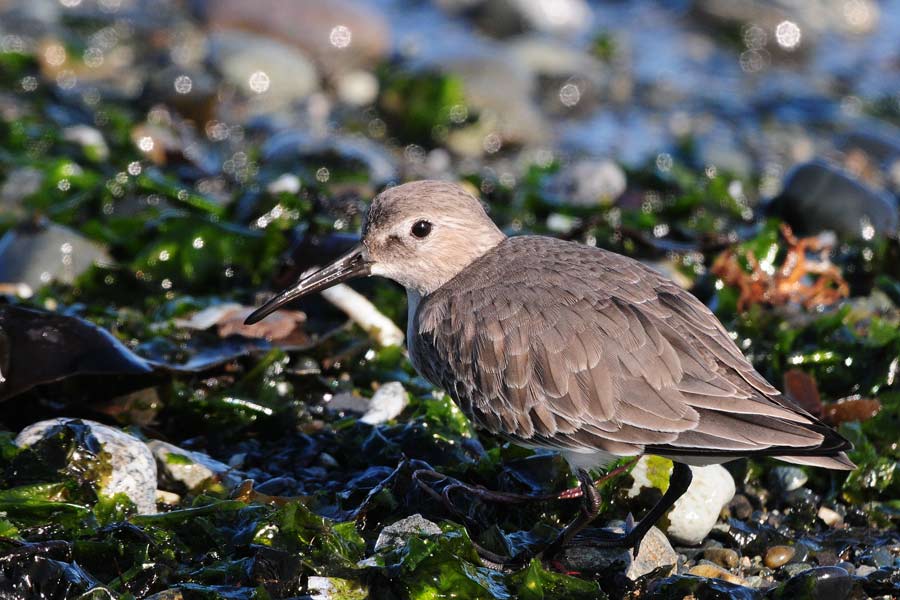 Finally, a shorebird. Nothing exotic, but it was my first Dunlin of the fall.

My poster is on display at: Victoria - Swan Lake Nature House 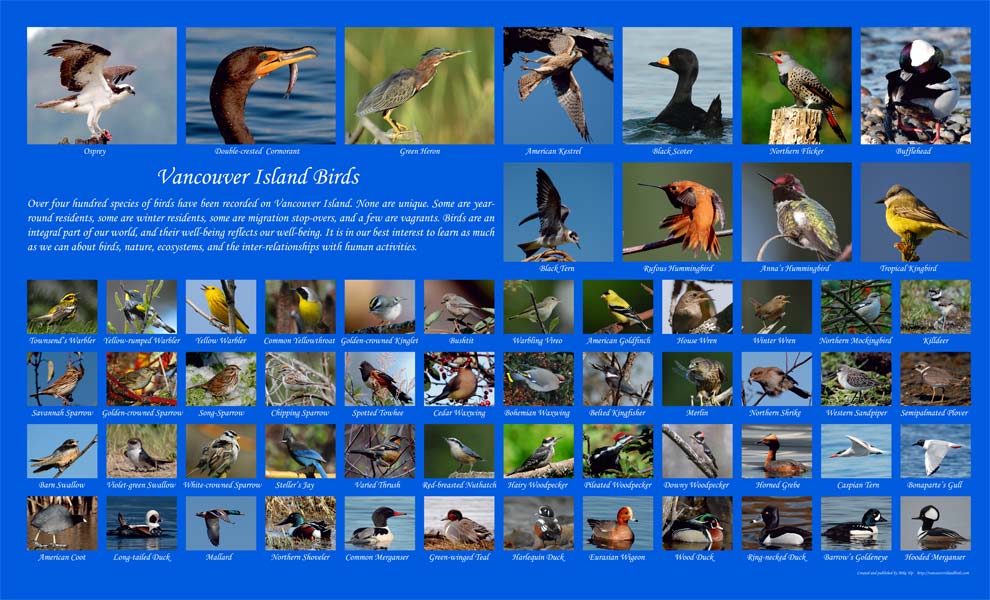 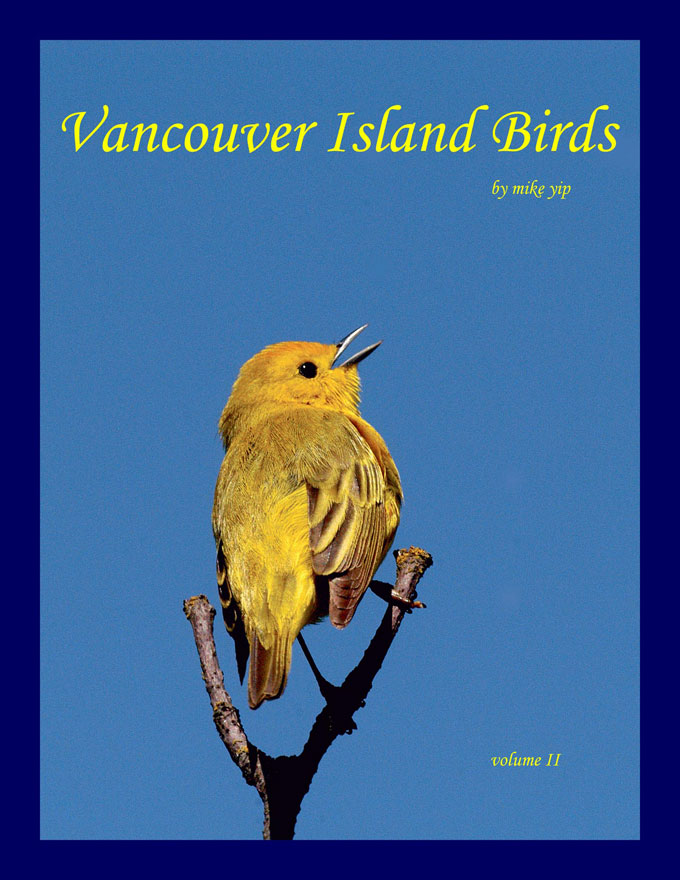 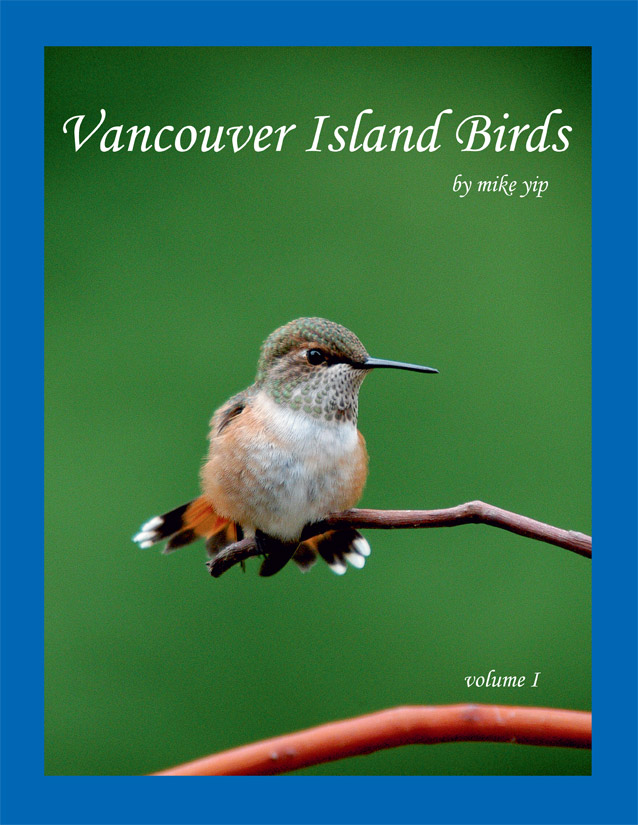 VOLUME I & II BOOKS AVAILABLE AT