Mar. 22/13 - Did you know that herring fart? Neither did I, but apparently they do. Scientists have observed herring releasing air from their anuses as possibly a form of communication and/or socializing. So what's the connection to the recent Salish Sea herring spawn? Nothing except maybe with billions of herring around there must have been a whole lot of farting going on. Yes, nature is full of surprises and there is so much that we don't know about it.

The annual Pacific Herring spawn is still underway, but the commercial fishery was completed on March 10. The final tallies for the catch was 6723 tons for the seiners and 6509 for the gillnetters. By modern standards, the Salish Sea herring fishery is considered sustainable with annual herring population maintained at around 100,000 tons. The annual catch quota is set at 20%. Besides the roe herring fishery just completed, there are also spawn on kelp, food, special use and bait fisheries. In many areas along the coast the herring populations have never recovered from over-fishing and other problems in the past. Although the annual catch quota may be sustainable for human needs, there is still the question of ecosystem needs.

Mar. 2 - There was a festive atmosphere at Qualicum Beach as hundreds of spectators enjoyed the spectacle of the herring fleet in action. The fishery opened on Mar. 1 and the action was centred around Denman Island and Qualicum.

Only the gillnetters were fishing while the seiners waited patiently for their opening.

The fine, sunny weather was great for the fishermen as well as the photographers with their camera, iPhones, and iPads.

The large boats without the drums were probably packers that delivered the fish to the fish plant. Fishing was so good that the fishermen had to slow down to let the packers and fish plant catch up.

Okay, this is a seine boat but since it has no net I'm assuming it was acting as a packer.

Calm conditions for the fishermen was a rare treat. March fishing weather is often cold, windy, miserable and sometimes dangerous.

Hundreds of thousands of gulls flock to the region during the herring spawn to fatten up for their spring migrations.

Boats and birds - the juxtapositioning of both symbolizes the conflict between human needs and environmental needs. In the long run both ecosystem and humans will benefit if the herring were allowed to reach full maturation.

The roe herring fishery is fueled by the japanese market for kazunoko (herring roe) which is only available from the female fish. The male fish and female carcasses end up as fish meal for the fish farms.

Gill-netting is slower and more labour intensive than seining, but the product is superior since only larger fish is caught.

Most of the fish is unloaded at Frenc Creek where it is packed in ice and trucked to processing plants in the lower mainland.

Approximately 30% of the of the catch by weight is sac roe.

Here's one for the gulliphiles. My best guess is Western Gull, but I'll yield to anyone with a different opinion. Westerns are common further south, but relatively scarce up here. The main problem with identificaction is hybridization. The question here might be how much Western is there in this gull?

The herring spawn didn't happen everywhere. It was life as usual for the Double-crested Cormorant at Deep Bay.

A few Surf Scoters at Deep Bay were still enjoying their normal fare of clams. It was still too early for the herring roe to become available for the ducks.

Eagles were common along the shoreline waiting for herring carcasses to be washed in by the tide and waves.

All that glitters isn't gold. The pearls of herring roe are just a valuable as gold for the marine ecosystem.

The gulls will certainly testify for the value of the roe.

Just another Bald Eagle waiting for dinner to be served. I wonder if it has ever tried herring roe? 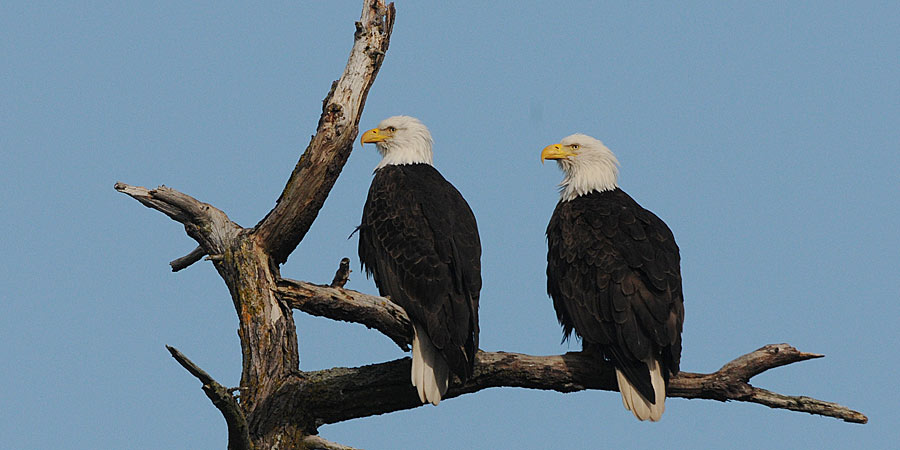 Ma and Pa Qualicum survey the scene at Qualicum Beach. The annual herring spawn is a sight they have seen many times.

Teamwork - With more boats than herring, the seiners tried to keep busy by helping each other.

Free lunch - The sea lions weren't shy about helping themselves to the herring in the seine nets. They could be seen regularly jumping in and out of the net even fron a half kilometer away.

Roe hunters - Barrow's Goldeneyes were just one of the many ducks enjoying the floating herring roe.

Harlequins weren't left out of the roe action, but according to Mike M. on Denman, the numbers seem to be down this year.

Sea of contentment - You'd never know that there was a herring spawn going on when you see the sea of sea lions at Northwest Bay. I wonder if they were just resting in between meals?

Steller and Cal? I could be wrong, but I think the big one on the left is a Steller and the little guy is a California?

The Breakfast Club - As mentioned previously, sea lions aren't shy about where they get their food. While some enjoy terrorizing the seine nets, others prefer the easy life cleaning up the spills in French Creek harbour where the herring was unloaded.

Long-tailed dive sequence - I've always wanted to document the dive sequence of the male Long-tailed. Now that I have my best effort ever, I don't think it was worth the effort. However, it was fun trying. Check out the next five pics.

A Change of Focus

As mentioned in my last journal, my plans for 2013 include a book on butterflies. Since then I have been overwhelmed by the enthusiasm and support offered by all the major experts in the butterfly community. Cris Guppy replied immediately to offer his enthusiatic support and since then, Norbert Kondra and Jon Shepard have also offered to help any way they can. The big news is that that our own island expert entomologist, James Miskelly, is joing me as a co-author and will be constructing distribution maps, assisting with the photography, and vetting the write-ups.

On the technical side of the production, I have my new ISBN number and a quote for the printing cost. Tentatively, I'm aiming for October printing and November release. My decision to only publish a 1,000 copies hasn't changed so it's essential for anyone who wants a copy to pre-order by emailing me. I'm hoping to sell all books directly which means they might not be available in the stores. So far I have orders from as far as Minnesota.

My poster is on display at: Victoria - Swan Lake Nature House. (Note: This poster has been produced in a more manageable size and is now available for $20 unlaminated and $32 laminated.)